Last week’s episode was always going to be hard to beat so this episode was something of a change of pace, slowing down the high octane drama as it were to offer us something intriguing so that our curiosities would be piqued and we would take the bait and come along for a ride in the TARDIS and solve a mystery. The idea worked, within the first few minutes something happens that makes you want to find out what’s actually going to happen by the end of the episode.

In what has become ‘a thing’ The Doctor has parked the TARDIS in what appears to be Clara’s kitchen – I could be wrong. Having the time lord interact with household appliances like the washing machine and random features like the gold fish in a bowl are the little things that make the show fun. The Doctor proceeds to attempt to convince Clara, yet again, that he wants her to come along with him (although we don’t get to see him do so yet) once interrupted by the TARDIS’s phone ringing. There’s nothing weird about a blue telephone box ringing (except perhaps that it’s blue) but when it’s the doctor’s it’s a different case entirely – the Doctor makes the point of stating a very few number of people know the number of the TARDIS in the first place. 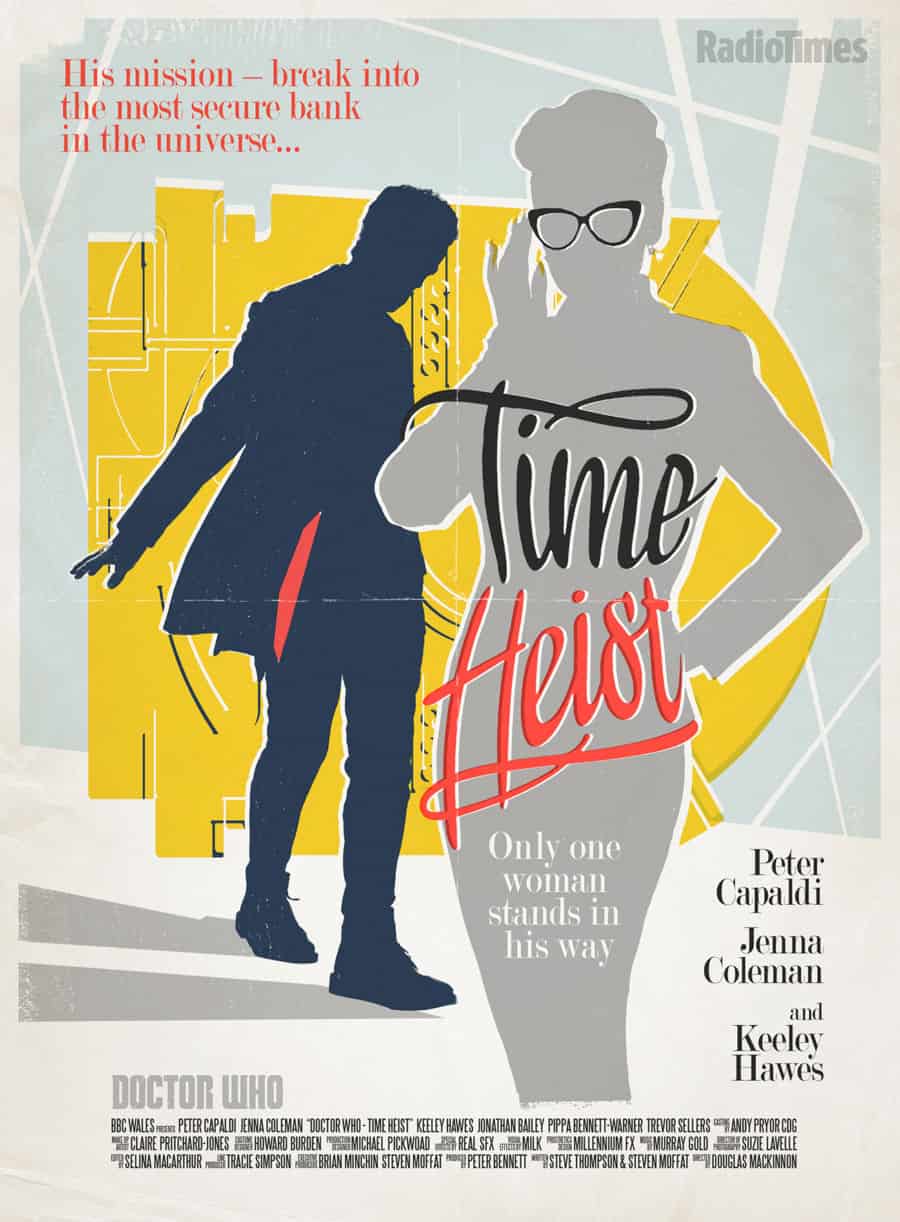 Clara warns the Doctor against answering the phone because it might be ‘a thing’ ie a case of sorts and she’s on her way to yet another date – how many has she had now? The Doctor answers the phone and they are suddenly at a table with two other people; one a mutant human and the other an augmented human (think cyborg). They are in a room, in a bank – the most secure bank in the universe and it’s just been revealed to them by a recorded message that they are there to rob the bank … then the episode kicks off as you are begging the story to unravel in a fashion you can keep up with but the twists help a formulaic ‘heist movie’ paradigm overcome its shackles in many respects to offer up something new and entertaining in a way only a way that a show about time travel could.

The monster of this particular episode is a new one. It’s a monster/alien (I’m still not decided which) that can sense/smell (still not decided on this one either) guilt. So an alien that can detect guilt … that’s not going to be trouble for the Doctor at all – oh wait, he’s absolutely full of guilt, whether he wishes to show it is another thing entirely. This monster disposes of a suspected impostor breaking into the bank and leaves a dent where the victim’s brain used to be turning the victim’s head into what the Doctor aptly described as ‘soup’. It was a horrible moment watching the scene and having seen it in action makes you cringe every time it’s on screen as the Doctor and his cronies are milling about trying to get to the location set for them by the mysterious ‘architect.’

Clara represents the honest pure essence of the Doctor’s mantra; never cruel or cowardly, to never give in and to never give up. As with every companion she is there to remind him of the ideals he aspires to no matter how grumpy and ‘not so fond of cuddles’ he gets. The augmented human represented the doctor’s rich and colorful history. He’s lived for an exceedingly long time and that means many, many loved ones and many foes, many triumphs and many failures. They all make up who the Doctor is now.

The augmented human more or less stated that by being who he was (a criminal) he had to sacrifice those he loved by forgetting them in order to protect them. I feel as though it was a way of saying The Doctor has been molded as much by his foes as he has by his family and friends. The mutant human wanted to obtain gene suppressant as a means of becoming her true self once more rather than taking on the appearances of another, never truly seeing herself but rather becoming someone else.

I feel as though this as another nod at the ongoing theme of identity in the series focusing on who the Doctor is and how he has become this way. I felt her yearning to become her true self rather than mirror images of other people she came into contact with was a subtle commentary on the Doctor and his aspiration to be ‘the good man’ in spite of his many faces and character and wardrobe changes and not become the reflection of the evils he comes into contact with in he universe.

After the episode it all seems to wash over you as the small elements suddenly become connected to a much bigger theme. I’m under the impression this series will be one people will be watching again for its rich stories and fine tuned performances. This episode was excellent; everything from the directing to the ever improving special effects and costume design. Bring on Episode 6!