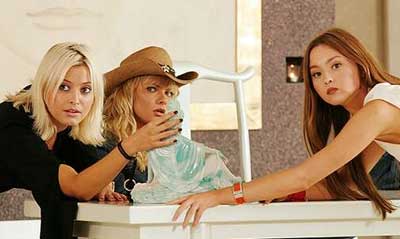 Ordinarily, a compromise of sorts is struck when a computer game is turned into a movie, as most such adaptations fail either to follow the feature film format or to deliver a viable screen version of the joystick experience. Instead, they typically serve up an unsatisfying blend of the genres by trying to cobble a storyline with well-developed characters onto graphic action sequences which would’ve been better off with plot left as an afterthought.

DOA: Dead or Alive is a refreshing exception to the rule, for it merely pays lip service to plot in favor of eye-popping fight scenes featuring scantily-clad women with gravity-defying boobs performing gravity-defying feats. Like a cross of Crouching Tiger, Hidden Dragon and Charlie’s Angels, this titillating chopsocky is the brainchild of Hong Kong’s Corey Yuen. 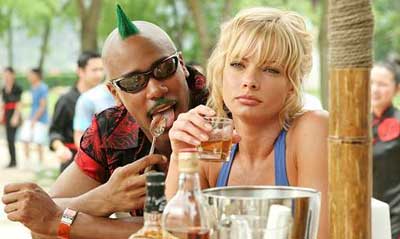 Yuen, ever in demand as a veteran choreographer of martial arts movies, has directed dozens of his own films, plus he’s staged the stunts for dozens more, including such big-budget Hollywood productions as Romeo Must Die, X-Men and Lethal Weapon 4. He’s probably best known for The Transporter, a surprise hit which landed on this critic’s 10 Best List for 2002.

DOA: Dead or Alive revolves around a winner-take-all, anything goes, invitational tournament of gladiators being staged on an exotic island in the middle of nowhere by Dr. Victor Donovan (Eric Roberts), a diabolical creep with a hidden agenda. The grand prize? A cool $10 million.

Although the bulk of the competitors are men, the real stars, here are the four fearless women, Helen (Sarah Carter), Christie (Holly Valance), Tina (Jaime Pressley) and Kasumi (Devon Aoki), at the center of this female empowerment flick. Prior to their arrival at the main event, each of our curvy heroines enjoys a gratuitous get-acquainted scene.

Get a load of what to expect of this testosterone-sodden teen fantasy. When we first meet Christie, she’s nearly-naked and coming out of a shower when she suddenly finds herself confronted in her hotel room by several cops about some stolen diamonds. No problem. Whipping off the towel to use as a weapon, Christie proceeds to wrestle with them in a manner rather reminiscent of an equally-unforgettable scene from Borat.

Warning. Don’t try to follow the plot. Don’t try to make sense of the cartoon physics. Don’t allow yourself to be put off by the cheesy trick photography. Otherwise, you’ll feel betrayed and be bitterly disappointed. The idea here is to sit back and delight in the cinematic equivalent of a fashion runway which seizes on the flimsiest of excuses to shoot sweaty, two-fisted beauties flying around in lingerie, swimsuits and skin-tight attire from every conceivable angle. 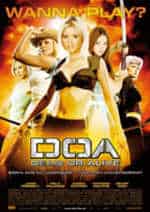 If Corey Yuen believed in truth in advertising, ala Snakes on a Plane, this flick would have a name like Jiggly Babes Kick Butt. The stuff that post-pubescent dreams are made of.