Obesity may be a challenging enough physical condition to deal with, but according to the sensitively crafted yet uncompromisingly candid female identity drama DisFigured, fat can be an unmerciful state of mind too. Filmmaker Glenn Gers, who pursued quite a different path as the screenwriter of that rebel girls gone wild feminist heist comedy Mad Money, dramatically explores in DisFigured weighty issues behind fat fascism in US society, and some tentative psychological if not physical solutions. 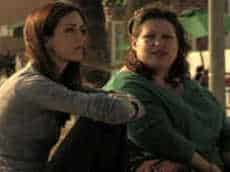 When quite evidently anorexic Darcy (Staci Lawrence) shows up to join the group because the scrawny, depressed woman can’t stop feeling fat herself, she’s treated like an intruder and sent on her way, despite a kinder, gentler Lydia’s objections. Later the two meet up in the local park after Darcy responds to a flier Lydia had posted for a walking exercise group, and they soon become quite unusual odd couple girlfriends. Primarily because Darcy feels a need to help Lydia stop eating, and Lydia herself is just plain lonely.

Their girl bonding, however, goes through some harsh rocky patches, especially when Darcy is pushed to confess that she finds Lydia’s body ‘disgusting.’ And Lydia in turn is understandably suspicious that she’s just a project for Darcy to work through her own personal problems, and basically Darcy’s ‘worst nightmare.’

Tensions over their conflicting eating disorders eventually tear them apart, with Lydia sensing a destructive turn into ‘some sort of weight loss fatal attraction.’ And out of control desires like sex, food and emotional neediness intertwine with their opposites of starvation, abstinence, denial, shame and self-hatred throughout this raw and revealing, intensely intimate drama. Though more attention paid to Darcy and her own struggles and related anorexia issues – she tends to function like a shadow in multiple ways to her more dramatically imposing polar opposite – would have added significantly more depth to the story.

DisFigured is the second movie to be released within a week, in addition to Darryl Roberts’ America The Beautiful, that deals ever so frankly with ingrained social traditions targeting women in physically and emotionally destructive ways in American culture. And amazingly, both films are conceived and directed by men. Go Figure…

To see a trailer of disFIGURED,