Proceeding like a string of bloopers from every recent blockbuster imaginable, Disaster Movie is a much too agreeable satire lite, when it should be going more for the cinematic jugular while dissing the worst of Hollywood fare. Filmmakers Jason Friedberg and Aaron Seltzer may have reined in the gross-out considerably since Epic Movie and Meet The Spartans, but an emphasis on tame and silly comes off more like a collection of bargain basement SNL skit punchlines.

That’s not to say that there aren’t some few and far between moments of inspired weird humor between long stretches of lame interludes. But the directors are so overly eager to please, that the lampoons of movies and reigning celebs alike keep coming at the audience at such a fast and furious pace, that it will likely make viewers feel as if they’re participating in a feature length round of constant catchup. There’s also the potential screw-up that unless you’re a hard core movie junkie, the quickie entrances and exits of key scenes from popular films, will simply fall flat as audience head-scratchers.

The clever opening spoof that lags as it fails to follow through on its initial promise, is the story’s setting in 10,0001 BC, get it? The world is reported to about to be coming to an end, coincidentally on 8/29/08, the same day Disaster Movie is opening in theaters. After an unpleasant prehistoric encounter in the wilds with a seriously unfanged and digestively challenged Amy Winehouse in beehive and shocking pink (Nicole Parker), Will (Matt Lanter) wakes up from a bad dream, is dumped by his girlfriend Amy (Vanessa Minnillo), and ends up at a party that finds itself in the middle of the movie Cloverfield as asteroids crash land downtown. 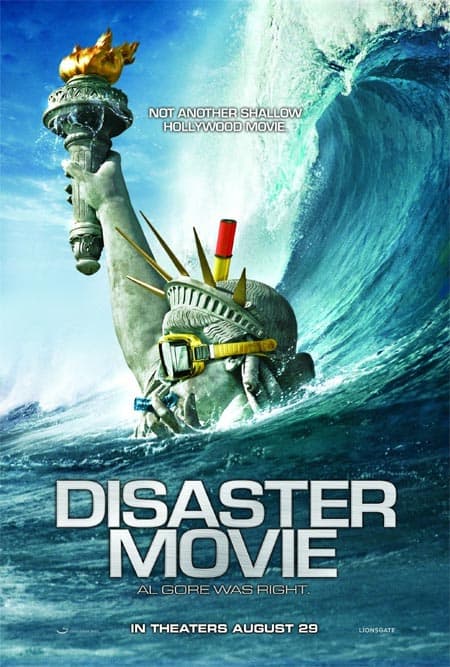 Will panics and ventures out to hunt down his ex, joined by Fat Albert look-alike Calvin (G-Thang) and his girlfriend Lisa (Kim Kardashian). And, a tag-along still very pregnant poor imitation Juno (Crista Flangan) selling her fetus on E-Bay and lactating spurting breast milk as a deadly weapon against aliens, when not morphing on occasion into Hannah Montana.

To give away much more of these wacky proceedings wouldn’t necessarily spoil the surprises, but certainly won’t enhance them either. Suffice it to say that what we have here is not just one, but multiple disaster movies rolled into one, use your imagination. Along with a horny Dr. Phil, a molester priest, and Michael Jackson hiding out in a car trunk with a little boy and a pet chimp for good measure. And by the way, not only is today the opening of Disaster Movie and the concurrent alleged end of the world as we know it, but it also happens to be the day Michael Jackson – the real one – turns the big 50, a possible goldmine for metaphor junkies to cap off this unconventional movie experience.