If the movie roles off-screen spouses choose are any indication of their compatibility in real life, then Matthew Broderick and Sarah Jessica Parker are irrefutable proof that opposites indeed attract. While superstar SJP is bubbly and out there when it comes to flamboyant tastes in men and designer duds as exhibited in Sex And The City, Broderick has long been the laid back and self-effacing protagonist of far more simple fare.

Following Broderick’s recent stints as reluctant baby daddy to Helen Hunt’s fretting bottom feeder in Then She Found Me, and a quietly duplicitous gambler in Finding Amanda, he turns up as a brain injured newsroom geek in Diminished Capacity. A former Chicago reporter on the political beat, Cooper has been downsized to proofreading in the comic strip department, since falling and sustaining lingering concussion symptoms, including periodically incapacitating memory loss. 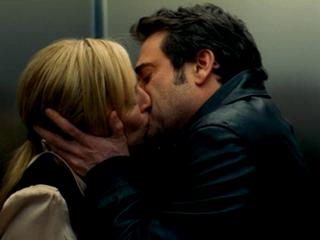 Frustrated and into denial about his current mental limitations, which are eventually expected to improve but not fast enough for this workaholic, Cooper is called away to his Missouri family home to take charge of his Uncle Rollie (Alan Alda). The exceedingly eccentric and stubborn old gent who lives alone, has been deteriorating mentally himself, and his senility has worsened to such an extent, that Uncle Rollie is in danger of burning the house down, if not his supper. Which happens to include dining on last year’s cheese.

Uncle Rollie, who fears, and rightly so, that he’ll be carted off to an old age home for his own safety, tends to greet visitors for that reason, with a shotgun. There’s also an unneighborly burglar who repeatedly tries to break in and steal a highly valuable vintage baseball card Rollie has hidden away. But with the help of Charlotte (Virginia Madsen), an old flame in town, Cooper is able to convince Rollie – sorta – to return with him to Chicago and sell the card for big bucks.

Diminished Capacity is an affectionate buddy road movie about baseball, elder belligerence, and uneasy male bonding between two odd couple guys with only disparate mental defects in common. And while one appears to have simply lost his mind, the other can’t seem to keep track of his. Director Terry Kinney has fashioned a humorous but sensitive take on the tragedy of disability, and making the most of our frequently fickle bodies under all sorts of sobering challenges in life.