This is a hugely successful book series and, with so much source material, the filmmakers clearly had a tough job deciding what they didn’t need so, in the event, kept it all. The result is a patchwork of ideas that lack cohesion but each patch has enough material to keep a TV series running for years, which is something Fox really should give some thought.

In a lot of ways Greg (Zachary Gordon) likes his life. He has mastered middle school and always has a good time with his best friend Rowley (Robert Capron). Unfortunately, however, his life at home is blighted by the existence of his two siblings and he is constantly at loggerheads with his elder brother, Rodrick (Devon Bostick). In an attempt to get them to bond, their mother (Rachel Harris), creates a system called ‘Mom Bucks’, which rewards the brothers every time they make an effort to get along with each other. 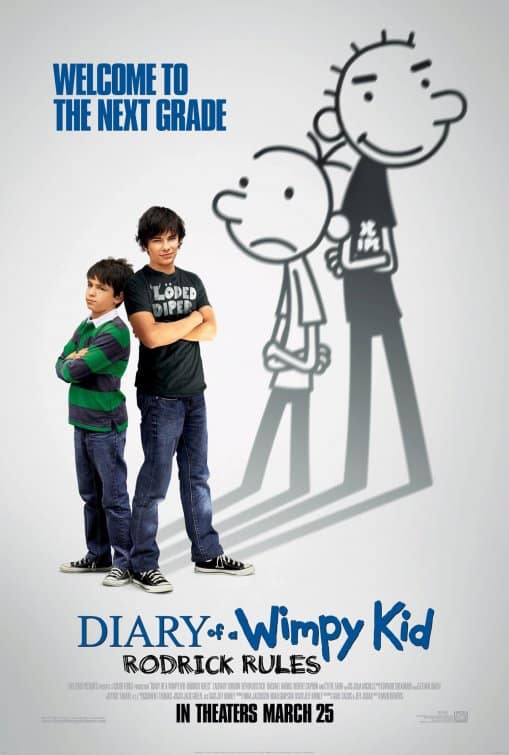 It seems the story that this story wants to tell is about the relationship between Rodrick and Greg, but the emotional structure is not worked on and never gets anywhere. Instead, the two are simply thrown together whenever the plot allows and, as a result, what is supposed to be the main storyline disappears whenever they are apart, which is often. What is also missing is a diary. Greg actually produces one about half way through, makes a couple of entries, and the entire idea is then abandoned. Didn’t anyone at Fox think that the title should reflect what actually happens in the film?

The one thing that does work is the Mom. She’s a pit-bull with lipstick and can so easily be manipulated by her children for the love of her children, that she creates the perfect flawed character for comedy. But, unfortunately, the Mom Bucks storyline also gets abandoned and we wander off to far less interesting places, with people who do not have an equal ability to entertain. An example of this is when the two brothers are forced to stay with their grandfather for a weekend, but even then a distraction arrives and the two are hardly alone.

Kids, of course, will sit and watch anything they’re taken to see. They aren’t worried about emotional journeys or cinematic structure and, as long as the screen stays busy, they’re entertained. Unfortunately, however, this doesn’t apply to the taxi driver who gets them there, whose tastes are rather more discerning, and which is maybe something else Fox should have given a little more thought.