Tim Alexander, this critic’s pick for best black indie director of 2007, essentially had to self-finance Diary of a Tired Black Man, which meant not a whole lotta folks got a chance to see it when he barnstormed around the country with it a year ago. Fortunately, based on the positive feedback from those who did view it, the film has recently been picked up by Magnolia Pictures which now plans to release it in theaters nationally in February 2009 in conjunction with Black History Month.

But if you’re too impatient to wait till then and you live in the New York City area, Diary of a Tired Black Man will be screening in at the Urban World Film Festival on Saturday, Sept. 13th, at 3:15pm. You can buy tickets for it online at: http://www.fandango.com/amcloews34thstreet14_aaqcr/theaterpage?date=9/13/2008

In recent years, numerous revenge-themed Hollywood adventures have seemed to take a certain delight in portraying black men as unreliable womanizers undeserving of any respect, like the sort of losers always airing their dirty linen any day of the week on The Jerry Springer Show. From Waiting to Exhale to Two Can Play That Game to Diary of a Mad Black Woman, these female empowerment flicks have generally left brothers not only brow-beaten but in need of an image overhaul. 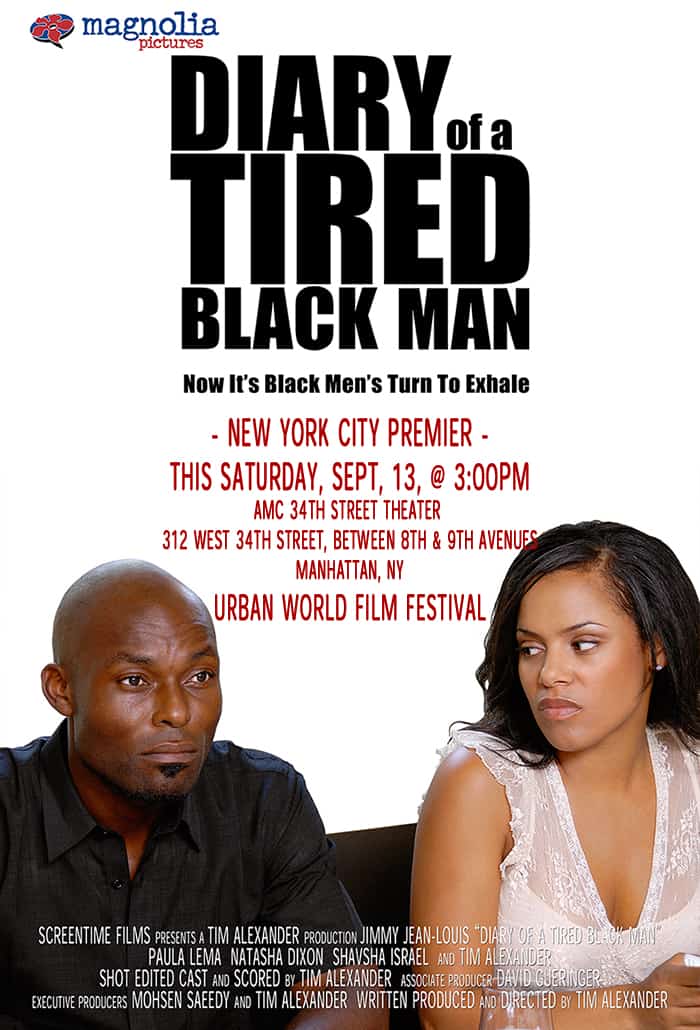 Now, help has arrived in Diary of a Tired Black Man, a fascinating half-documentary-half melodrama which marks the directorial debut of Tim Alexander. You may remember how he generated a phenomenal air of anticipation about this controversial picture merely by posting a trailer on the internet.

That three-minute teaser captured the explosion of lead character James (Jimmy Jean-Louis), a man who was frustrated about being dogged by his ex-wife, Tanya (Paula Lema), and her girlfriends because he showed up with a white woman to pick up his daughter during a custody exchange. Without reacting to their attack, he calmly pauses to address Tanya and her Amen chorus of supporters. Speaking in a measured tone of voice, he gets the last word, letting them know that he had been, and still is, an excellent though unappreciated provider.

The full-length version of the movie opens with this same scene, but rather than proceed with the rest of the modern morality play immediately thereafter, the ingenious director came up with a brilliant cinematic device which only heightens the already palpable tension. He freezes the action after this point of departure (and again periodically throughout the picture) for revealing man-in-the-street interviews featuring fan reaction to the commercial, comments culled from footage he shot while crisscrossing the country with a hand-held camera.

So, essentially half of what we see onscreen is an intriguing documentary of everyday folks from all walks of life, both male and female, weighing-in on the battle-of-the-sexes. And these remarks, ranging from the profane to the profound and from the silly to the sobering, prove to be every bit as telling as the fictional front story.

For instance, a young woman quick to question whether there are any good black men out there refers to the married guy she dated for two years as “typical “and an “effed-up, trifling-ass Negro.” Yet, when asked why she even entered such an ill-fated, illicit liaison in the first place, her only answer is that she “fell in love,” leaving the audience to conclude that she’s just as much to blame for her lot in life as all the black men she’s just dissed.

To Tim Alexander’s credit, he does also include conversations with some African-American females who don’t absolutely go berserk when questioned about the behavior of brothers, like the one who forcefully makes the case that, “Not every black woman walking the face of this Earth is angry. There are plenty of sweet, sugary, syrupy sisters that I know that brothers don’t want.”

Overall, the movie does come down rather hard on sisters, even though it doesn’t let brothers off the hook entirely. Cleverly-edited to keep the audience on the edge of its seat, the movie flits back and forth between this sort of frank dialogue and the riveting tug-of-war between James and Tanya. With both the factual and fictional parts of the picture equally absorbing, expect to emerge from theater emotionally drained yet inspired to discuss the degree of dysfunction permeating African-American relationships among your friends and family.

Tim Alexander is quick to say that “Diary of a Tired Black Man is not a movie, It’s a message.” Well, I’d say it’s both, and if his aim with this message movie is to kickstart an overdue dialogue for change, I’d say congrats for more than meeting that challenge.

To see a trailer of Diary of a Tired Black Man,