Sci-fi is the genre where special effects come into their own and 3D animation can turn the watchable into the spectacular. So with Despicable Me having both these components, plus a great concept, Universal must have decided they didn’t need to try too hard with the script and in the event turned out something rather mediocre. Expensive, but very, very mediocre.

Gru is a middle-aged inventor who channels his fantastical skills into pulling off evil crimes in the hope that one of them will bring him the notoriety he desperately seeks. His latest challenge to himself is to steal the moon, but he gets side-tracked by three little orphan girls who introduce him to a world his isolation has previously prevented him from entering. 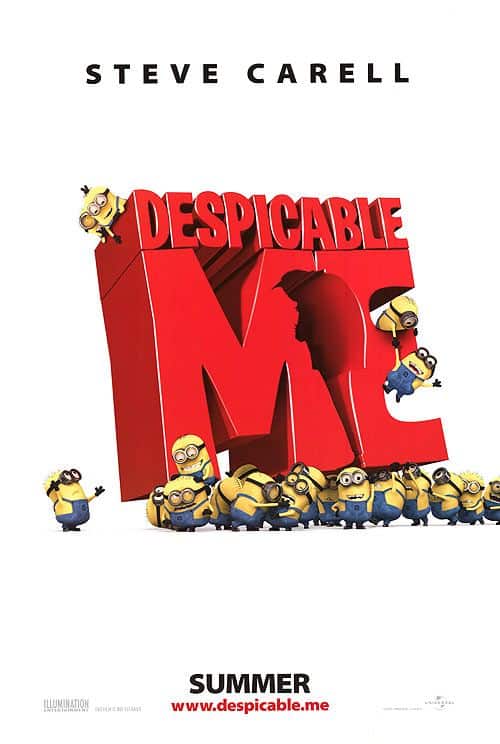 The opening of the film is in a desert, where a crime of such significance has been committed that it makes the world news. With the plot kick-started by people we never see again, we are whisked away to meet Gru, who chats with someone we also never see again. A little later we join our hero in a business meeting and it is here that the desert incident is dealt with from Gru’s point of view, but now the tension is gone, it’s all just back story and comes much, much too late. Gru’s in-the-moment reaction to being eclipsed by a young usurper would have been most entertaining and would also have given him a clear motivation to take greater and greater risks to win the crown of disrepute he so covets.

We are taken into Gru’s house and workplace, where he sits on what looks like a stuffed tyrannosaurus rex couch (eat your heart out, Sarah Palin, you only shot a bear), keeps a vicious fanged creature as a pet and there are Adams Family-esque niceties everywhere. So far so good. But we then go into the basement where a crew of hundreds of cute little yellow people toil to help Gru create his destructive weapons and these adorable minions clearly do not belong in this house of evil. There is no explanation for their existence or how they got there, or why everyone is still beavering away at Gru’s inventions when nothing he has ever created has been a success, despite the fact that he’s enough of a genius to have invented a machine that shrinks entire planets. Instead of explaining what is already there, stray storylines and gadgets are thrown in willy-nilly, all meant to fill the gaps left by ideas that remain incomplete.

The only thing that could have saved this film is humor, but with just a couple of amusing lines in the entire ninety five minutes, this just didn’t happen. So where does this leave Universal’s latest offering?

Any children’s animation has an instant audience, as long as Mum and Dad will take them, but therein lies the crunch. Kids don’t read reviews, but parents do, and if they’re going to spend their hard-earned leisure time driving to the movies, finding parking, shelling out for tickets, pop-corn, soda and possibly the most expensive hot-dog in the entire Western World, won’t they at least want to enjoy a little cinematic pleasure? And if they know this isn’t going to happen, when they drive past all those Despicable Me posters, and the kids ask if they can go, who can blame them for saying no? And when the kids ask why, all the parent has to say is that the man in the film kills wild animals, has them stuffed and then uses them as living room furniture. Who on earth would want to support someone who does something as barbaric as that?

Apparently, nearly 50% of the population of America, but that’s quite another story.