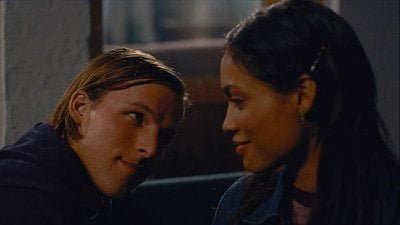 Maya (Rosario Dawson) is an honors student with a bright future at fictional Claremont College, at least until the fateful Fall she crosses paths with Jared (Chad Faust), a buff jock she meets one night at a party on campus. Beguiled by the exotic beauty of the ethnically-ambiguous brainiac, the handsome boy-most-likely makes a lame effort to win her with some transparent pickup lines.

Although she’s initially put off by the flirtatious football player’s amateurish overtures, against her better judgment, Maya still rewards his persistence by agreeing to see him again. After a couple of uneventful dates, she accepts an invitation back to his bachelor pad, only to see another side of the lecherous lothario suddenly emerge while they’re canoodling. 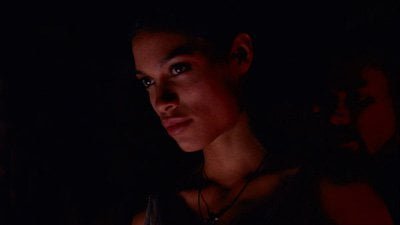 She makes it clear that she’s not ready for intimacy, yet Jared just won’t take “no” for an answer. And at this juncture, he makes a Jekyll and Hyde transformation into a monster. Given his physique, Maya doesn’t stand a chance when he decides to have his way with her, and during the brutal rape which ensues, the sicko adds insult to injury by referring to her by disparaging epithets such as “bitch” and “baboon” in an expletive-laced diatribe.

Maya is left too traumatized by the violation to report it to the authorities, and instead starts spiraling down a self-destructive path which includes drug abuse and sexual promiscuity. This sordid turn of events serve as the tragic prelude underpinning Descent, an intriguing character study which is as much a harrowing mood piece as it is a female empowerment revenge flick.

Rosario Dawson exhibits a previously unseen range, here, more than meeting the challenge of the most emotionally-demanding role of her career. This claustrophobic psychological thriller also marks the impressive writing/directorial debut by Talia Lugacy who has imbued her heroine with an inscrutability which keeps the viewer guessing and makes the denouement that much more shocking a reveal. 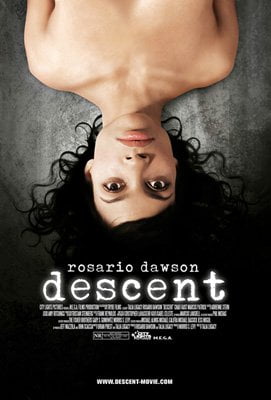 For, by the Spring semester, Maya’s once perky persona has degenerated into the introspective edginess of a hopelessly tortured soul, a development that makes her motivations almost impossible to read. Sadly, she looks depressed as if she’s merely going through the motions, even after landing a plum position with her favorite professor as teaching assistant.

Jared, who happens to be taking the course, is cocky as ever when Maya catches him cheating on a test. First, she threatens to report him to the dean, but eventually settles on luring the clueless creep to her lair for a surprise designed to even the score once and for all.

Rated NC-17 for profanity, ethnic slurs and a brutal rape.