One of the cardinal rules of whodunit crime thrillers crafted to mess around with your mind is – or at least should be – that you never reveal the major plot point in the movie title. But since the cat has long since been let out of the bag in Deception, even before you get to the first paragraph of this review, suffice it to say that perhaps a more intriguing enigma as to why Wall Street is performing so poorly of late, may actually be traced to a few clues hidden within the convoluted machinations of this sleazy psychological thriller. That is, the phenomenon of the kinky private sex club proliferating among the financial analyst swells, at least in Deception, may be distracting them from sufficient concentration on money management.

Ewan McGregor is Jonathan McQuarry in Deception, a lonely, New York City bottom feeder nerdy accountant for hire at mega-corporations, who’s fixated on the symmetry and order of the numbers he tabulates daily. He’s the sort of outside-looking-in guy who often has subway doors slamming in his face. And the most adventurous moment in his life to which he confesses, is dialing a phone sex line and ending up paying minute by exorbitant minute, to give the female at the other end a half hour of tax advice.

One day, jovial ladies man patrician lawyer Wyatt Bose (Hugh Jackman) rather aggressively strolls into McQuarry’s life at work, and cultivates his friendship by sharing a joint, then a tennis game, and finally a succession of horny, high IQ Wall Street women who are part of a secret sex ring around town. Before long, McQuarry has descended into an indiscriminate and compulsive pattern of promiscuity and debauchery. Until he becomes hopelessly infatuated with sex club member “S” (Michelle Williams), a secretive, accommodating blonde who has femme fatale written all over her. But McQuarry is so taken with “S,” that all he wants to do is share sandwiches and small talk with her. 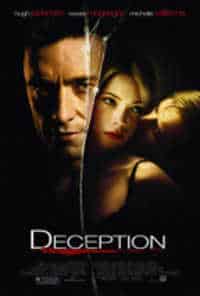 Without giving much more away, these three characters end up in a treacherous triangle ruled by multiple seductions involving erotic and also emotional same-sex entrapments, as well as interchangeable identities and split personalities. But Deception suffers from a serious identity crisis of its own, alternating between a love story, a sexy noir, and a psychological crime caper, and failing to settle sufficiently on any one of these competing narrative strands. And last but far from least, an over-achieving malevolent mastermind who’s such a genius at circuitous schemes to get other people to commit crimes on his behalf, that the greatest mystery in Deception, may be why he can’t just think up ways to simply do the dirty work himself to begin with.