Jesse “Justice” Smith can be caught kicking butt and taking names on the revitalized, classic reality series “American Gladiators.” One of the show’s most feared competitors ever, he looms at 6’8″ tall while weighing-in at almost 300 lbs with 22″ biceps.

Justice is the only Gladiator to use his or her real name on the program which airs Mondays at 8 PM (ET/PT) on NBC. As with the original, the spectacular features such familiar events as The Joust, The Wall, Hang Tough and the Eliminator, although adding splashy twists, special effects, water skills and some state-of the-art technology.

Justice will also be seen in a supporting role in two independent features in 2008. One is The Mannsfield 12, a story about a dozen black inmates who go into business with their warden by bringing drugs and contraband into their prison. The second, Beyond the Ring, is based on the true story of Andre Lima, a Brazilian fighter on a mission to save his daughter’s life. Justice plays Zulu, the reigning Mixed Martial Arts (MMA) champion. 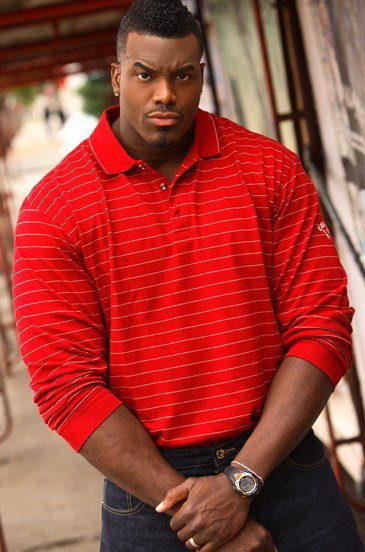 When not acting or gladiating, Justice enters MMA contests in the Super Heavyweight division. A black belt in Tae Kwon Do, which he has been studying for the last 15 years, he is known for his trademark move, the “Flying Knees.” While he loves MMA, he doesn’t want to fight for a living. What he loves about it is the focus and passion it brings to his life in a mental and fitness capacity.

Born in Detroit, Michigan, Justice was an Army brat raised in Columbia, South Carolina until the age of ten when his father was transferred to Germany. It was also around this time when he first saw Arnold Schwarzenegger in the movie Conan the Barbarian. He asked his mother for weights for Christmas and the rest is muscle beach history.

After the family returned to Columbia, Justice became one of the nation’s most highly-recruited college basketball prospects. But tragedy struck before he committed, when his cousin, Rodney, died taking a gangsta’s bullet meant for him. Shell-shocked, he was unable to focus on his budding basketball career or anything else for a long time.

On the home front, Justice loves to spend quality time with his wife Daisey, his 7 year old son, also named Justice, their French Bulldog, Bruno, 6 fish and 4 frogs. He also loves to fish and to ride his mountain bike. Because he loves to donate his time to any causes that help kids, it’s no surprise that high on his agenda is to give back to the community.

KW: Hi Justice, thanks for the interview.

JS: The money and fame. Ha-ha! Just kidding! It was a show that I watched as a kid, and I wanted to be a part of it.

KW: What type of diet and exercise regimen do you have to follow to stay in this great shape?

JS: I really don’t follow a strict diet, I just watch my fat intake and stay away from fried foods.

KW: How much wear and tear does the weekly tapings take out on your body?

JS: Well, me being a superhero, it does not do too much wear and tear on my body, ha-ha! Naw, sometimes I will get my fingers jammed or twist my ankle, but other than that I keep it moving.

KW: Do you enjoy this better than acting?

JS: They both are different, challenge-wise. The competitive side of me is really enjoying it, but there are two different sides to me. The acting is more of a challenge for me because it is something that I have to develop, whereas being a Gladiator comes more natural, and I love the physical challenge. But ultimately, acting and being a Gladiator are definitely two different animals.

KW: Have you ever gotten hurt while filming the show?

JS: I have gotten hurt, but pretty much I do the hurting! [LOL]

KW: Are you surprised by the show’s popularity?

KW: Have you ever watched the Japanese television show, Ninja Warrior?

KW: Would you consider tackling the Ninja warrior obstacle course?

JS: Yes! But it would be a piece of cake for an American Gladiator.

KW: Were you a fan of the original American Gladiators?

KW: Who was your favorite gladiator?

KW: I read about how at 6’8′ your had some promise as a basketball phenom while in college, but that you lost interest when your cousin was shot and killed while saving your life in an ambush Tell me about the incident.

JS: Well, my cousin was my best friend and we were very close and I looked up to him. I admired everything about him. I think about him everyday, and he is one of the reasons that I do what I do. He saved my life.

KW: Is the perpetrator behind bars?

JS: He did 18 months and was freed on good behavior because he had a family member in the judicial system in Columbia, South Carolina.

KW: How long were you traumatized by the tragedy?

JS: At least 10 years, being haunted by nightmares. I was unable to watch any type of violent programming.

KW: “Realtor to the Stars” Jimmy Bayan wants to know where in L.A. you live.

JS: I live in Torrance, CA

KW: Bookworm Troy Johnson is curious about the last book you read.

JS: Don’t’ Start the Revolution Without Me! written by Jesse Ventura

KW: I got this question from Tasha Smith: Are you ever afraid?

JS: Sometimes…what am I afraid of? [Laughs]

JS: What motto do you live by?

KW: Okay, what motto d you live by?

JS: “Freedom or death!” and the truth shall set you free.

KW: What do you do to unwind?

KW: Who are you supporting for President?

JS: Ever since I was a kid. Everything that I am doing now is what I wanted to do as a kid.

JS: Stay focused and stay determined. Don’t look to anyone else to be your determination, have self determination; it will take you very far.

JS: I haven’t seen any fan mail yet. Please send some!

JS: I want to be remembered as someone like Mohammad Ali. He was not just a fighter he was a freedom fighter.