A cautionary indictment as much about the destructive direction society is headed these days as what’s happening with movies, Death Race spouts foreboding prophesies about the future that could already be closing in on us. Director Paul W.S. Anderson (Resident Evil) updates Roger Corman’s 1975 homo sapien roadkill romp, Death Race 2000, but now humans are less gullible exploited participants in their own demise, than rabid accomplices to giddy post-modern celebratory online snuff.

And while subversive shlockmeister Corman’s 1975 original was a kind of cultural collateral damage crafted as blowback from the Vietnam War, Death Race relocates to a vast 2015 industrial wasteland, where the economy is into radical free fall. And even the greedy corporations overseeing privatized prisons are experiencing diminishing returns, despite warehousing millions as they do (nearly 2 1/2 million and increasing by one thousand a week in the here and now) in capitalist captivity. 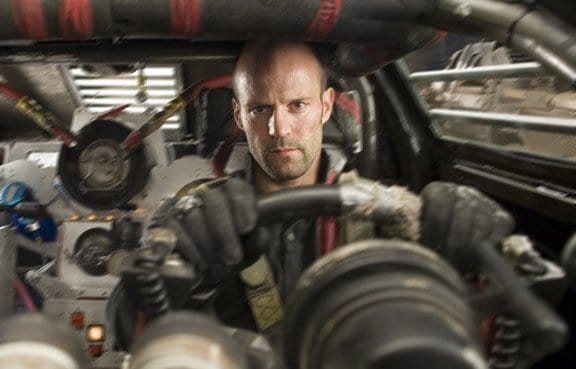 And grasping at alternative means to heap continuing escalating profits, one such detention complex ruled over by dreaded, deceptively prim, icy dragon lady, Warden Hennessey (Joan Allen) has embarked on a high body count, high money return series of gladatorial car races to the death, with the last inmate standing to be rewarded with an early prison release. Well, maybe.

But running out of capable, expendable humans to steer these high attrition rate fatal crashes for a bloodthirsty but easily bored online subscriber public, the penitentiary conspires to kidnap unemployed, former professional racer Jensen (Jason Statham) in a more than elaborate scheme, by framing him for a murder that lands him in the slammer. And while the cons are set against one another, the better for the authorities to control and exploit all of them, as likewise devastatingly depicted in Felon, a rebellious solidarity emerges. Including an inhouse low-testosterone, high IQ techie geek squad presided over by Coach (Ian McShane), and as fairy god felons of sorts, protecting Jensen along the way.

But social commentary touching on the connection of greed and war, and character conflict along with sexed up female con backseat drivers, is thin pretext for the incessant, at times visually surreal but mostly oppressive heavy metal havoc orgy of war machine, napalm shooting designer macho-mobile boy toy vehicular homicide. Rendering this ride strictly for speedway spectator junkies to begin with, and love of the sport a must. Though with the irony of Hollywood reaping the profits of ever more creative movie murder to delight those easily bored viewers, who gets the last laugh may not even be in question.