A bittersweet family saga that plays out as a kind of Cinema Paradiso in old Tel Aviv, Dear Mr. Waldman (Michtavim Le America) delves with rich tenderness and raw emotion into the myriad, sometimes peculiar ways that human beings adapt to traumatic loss and tentatively embrace healing. And for withdrawn ten year old daydreamer Hilik Waldman (Ido Port) in 1960s urban Tel Aviv, sneaking off to the movies in the afternoons affords a choice of larger-than-life heroes as alternative identities, with which to establish control over an insecure home life, reinvent fate and pursue happy endings.

Hilik is distraught in particular over the fragile psychological state of his parents, Holocaust survivors that he feels must be protected and shielded from further emotional harm, in a quite heartbreaking and solemn parent-child role reversal. Especially Hilik’s dad Moishe (Rami Heuberger), the sole Holocaust survivor of his first marriage. When Moishe learns one day that the name of US President Kennedy’s advisor is Jack Waldman, he cannot be dissuaded that this man with the same last name as his own is the son he was separated from in the camps, and Moishe will not rest until he can make contact with him. 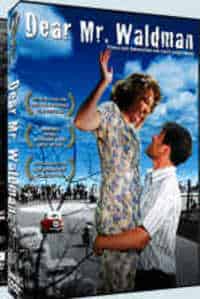 Hilik for his part, imagines through exposure to far too many movies, that he possesses his own inner gladiator Spartacus, who can make his disintegrating world whole again. And though torn between wanting to comfort his father by helping to possibly reunite him with his first-born son and Hilik’s half-brother, the boy at the same time fears losing Moishe if he returns to his past life and abandons him.

Hilik’s solution, to fabricate a pretend correspondence between Jack Waldman and Moishe, is at the heart of Hanan Peled’s compassionate yet candid autobiographical tale, and the search of his own father to find his son missing in the Holocaust. Dear Mr. Waldman is ultimately a wise and affectionate story about the positive powers of the imagination to cope in surprising ways, with an often troublesome and far from perfect human existence.

Dear Mr. Waldman is available on DVD from Echelon Studios, at www.echelonstudios.us.