Life of course, is never lived backwards, but Hollywood tends to have a very different chronological idea in that regard. Masterminded rather than crafted from end to beginning, the long distance romantic weepie with at least four disease of the week ailments competing for attention and testing audience patience in the extreme, Dear John sets its sights on another sort of Big Love for a perpetually whining Amanda Seyfried. But saving the big money shot for last and then working its way back running assorted interference on the path to getting there, is a poor excuse indeed for pathetic full length feature suspense tacked on to a more than predictable finale.

Seyfried is Savannah in this cooked up red state concoction targeting blue state sentiments, a liberal do-gooder coastal South Carolina southern belle coed who takes time off from socialite circles to help rebuild houses by hand destroyed in hurricanes. And when not confusing falling in love with a medical pity party. But when Savannah falls big time for other side of the tracks Green Beret surfer John (Channing Tatum) after he rescues her handbag that falls into the water, she dumps her smitten boyfriend seaside, without a second thought. 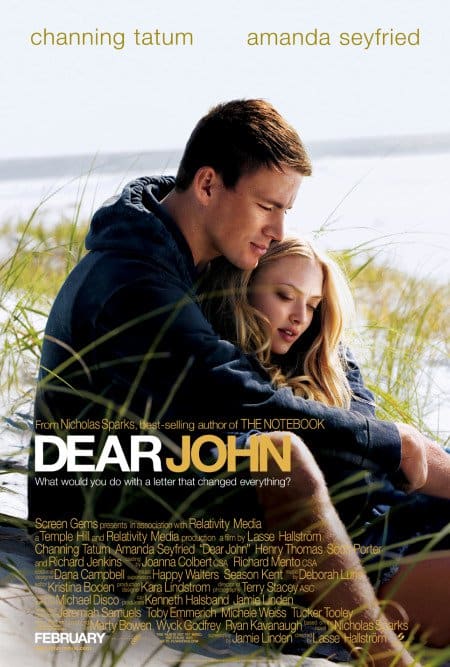 And John’s bad reputation around town related to anger management is no big deal either, even after he punches out a posse of party animals on the beach, because she’s got her own temper issues having to do with ‘cursing inside’ on mute. So after groping each other in the rain for a bit, Savannah’s Special Forces lover takes off for his next top secret invisible military mission in the Middle East which cannot be revealed. A convenient plot point as well, since Hollywood typically tiptoes around politics and any messy confrontation with the real world, while also gaining the cooperation of the US military to provide props and locations, in the bargain too.

Meanwhile, two autistic characters materialize, one whose confident layman diagnosis is based on being an avid coin collector, as a cloying in the extreme soundtrack kicks in every few minutes, telegraphing without the least subtlety an album to come. And though years pass with John on military assignment engaged in who knows what and snail mail barely holding their relationship together, there’s no such gadget in existence as a telephone between them, let alone email.

And that’s why Dear John just doesn’t work, for a variety of reasons. Directed by Lasse Hallstrom (The Cider House Rules), written by bestselling suds maven Nicholas Sparks (The Notebook, Message In A Bottle) who brags in the press notes that he ‘attends church regularly’ and counting no less than nine producers, most of them attached to The Nativity Story, Dear John is simply too old fashioned and outdated for its own good. For while Seyfried is set up to exhibit the patience of a saint and found lacking while awaiting John’s return from battle for at least a decade, she’s also made to play second fiddle to his first passion – a kind of Captain Ahab pursuit of his own particular white whale – Osama bin Laden.

Which is really a cruel and inevitably unconvincing fate to heap on such a hottie as Seyfried. Who is expected to be stuck in pause as permanent celibate sweetheart for a decade while John sticks it out in an army that has long since become a voluntary choice. So just blame it on Osama, or better yet, the filmmakers.