A generation gap vampire comedy fueled by youthful rebellion in perpetuity, Dark Shadows weirdly reconfigures age-based alienation to postulate instead, don’t trust anyone over two hundred. And with born again, repeat offender bad behavior run amok in this subversive reimagining of the mid-20th century cult television series in question, it’s no surprise that Tim Burton is at the helm of this devilish Twilight on acid outing.

Johnny Depp presides over the deliriously kooky excursion as psychologically unhinged time traveler, Barnabas Collins. Heir to a thriving fish company established by his family when they migrated from Liverpool to what became Collinsport, Maine in the early 1700s, Barnabas met with ill fortune back then after two-timing unrequited house servant and moonlighting sorceress, Angelique (Eva Green). 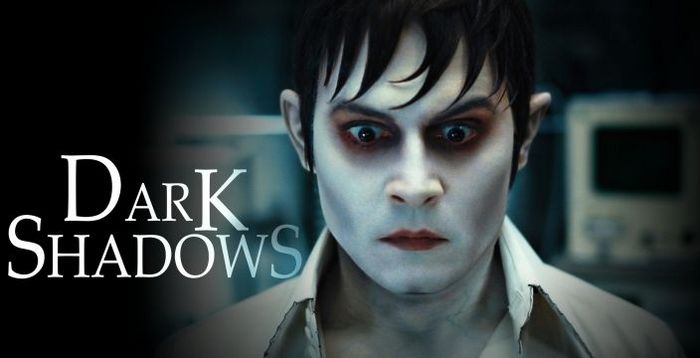 And when Barnabas repeatedly resists her advances, Angelique inflicts a curse upon her faithless lover, transforming him into a vampire and sealing his body in a coffin beneath the earth. And two centuries later in 1972, Barnabas finds himself liberated from his disturbed grave and headed back home when construction workers excavating the land, unearth unfortunately for them, his long napping but quite famished corpse.

The gleefully macabre humor here derives from the culture shock of an alien thrust into a period defined by a vastly different alienated cultural revolution. And a dysfunctional vampire negotiating an identity crisis of his own in the midst of the rampant mid-20th century personal identity upheaval in progress.

Especially pertaining to women, and Barnabas’ collision with novel ideas about them that he encounters when returning to the family manor. Including uninhibited adolescent kin Carolyn (Chloe Grace Moretz) whom he mistakes for a hooker according to his own 18th century social references. And his historically based tendency to turn on to women anatomically for their ‘fertile birthing hips.’

Sleek, stylishly occult and visually daring with a potent blend of rebel period music kicking in, Dark Shadows is steeped in whimsically delightful flourishes. And on tap as dazzling centerpiece, a wickedly trippy sex scene between Depp and Green, hatched from the predictably uncanny, slightly mad imagination of Burton. While Depp rarely ceases to pathologically mystify throughout. Whether diligently applying a toothbrush to his fangs, or occasionally out for a stroll resembling a sinister Michael Jackson impersonator.

Where Dark Shadows does falter, is a sagging, increasingly slapstick plot in need of serious resuscitation along the way. And leading to the eventual impression that longevity may not be an issue for Depp’s Barnabas but the plot is another matter, as it segues from surreal to terminally silly.