Even worse than a wife making the shocking discovery that you’re having a secret affair, could be her finding out about your secret writings, say, The Origin Of Species, if we’re talking Charles Darwin. And what man in his right mind would want to be the unfortunate recipient of a spouse’s fury, and might even think twice about making public such a blasphemous 19th century thought like the theory of natural selection, which could have instead found its way into the family fireplace. That is, if you accept the premise of Jon Amiel’s Darwin biopic, Creation.

Not quite as focused on a groundbreaking theory of human evolution rooted in the animal world that shook religious authority at its core and still does, Creation domesticates Darwinism in the extreme, as the henpecked hermit and obsessed naturalist (Paul Bettany) ponders the mystery of the male nipple when not contending with his deeply religious wife (Jennifer Connelly). Who basically, is hearing none of it. 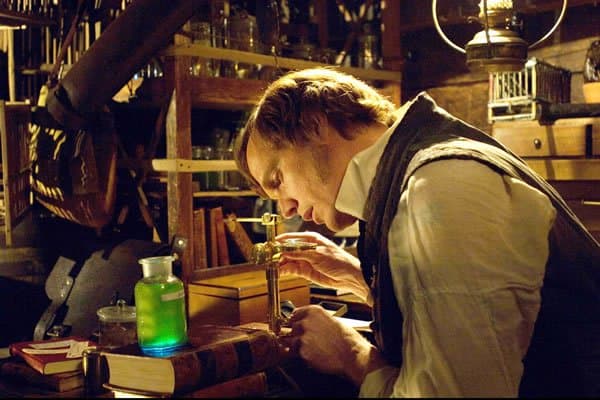 Bettany conveys with poetic intensity and an excruciating anxiety, a man torn by a terrible discovered knowledge he can hardly bear to acknowledge as he faces public scorn and resentment at home, a kind of second coming of Adam booted out of the Garden. While Connelly, the actor’s wife offscreen as well, projects in this dreary drama adapted from Darwin’s great, great-grandson Randal Keynes’ book Annie’s Box, such a stiff and gloomy gothic figure in comparison, as if her lack of sympathy for her own character is barely containable.

In contrast, Darwin’s exuberantly doting relationship with his favorite daughter Annie (Martha West) is so unusually vivacious, as to give the misleading impression of a, let’s say, theory of unnatural selection as substitute for a consistently cold fish wife.

And while explanations abound at the finish line as to long festering family dysfunction and intruding occult visitations, this more often than not puzzling intellectual and emotional guessing game of a movie distracts from the more dramatically pressing matter at hand – Darwin’s impact on a turbulent moment in time rather than primarily the other way around. The result is unfortunately less an inquiry into the enormous impact of a subversive idea and its fearful but determined messenger on the course of human history, than contentious remote country estate retro-reality show.