This film is tagged as a sci-fi/action/thriller, but it plays like a mega-long montage, with film stars rushing across a plethora of plotlines, reciting endless melodrama until they finally collapse into an ungainly finale that is coated with cheese.

Beth Emhoff (Gwyneth Paltrow) returns from a trip to Hong Kong and within days dies of a mystery virus. Similar deaths are reported across the world and as the threat of this deadly disease spreads governments set up an international team of doctors who try to deal with the impending catastrophe.

From the beginning to the end, A-list stars pop in and out at such speed that, after a while, it starts to feel like they’re merely auditioning for their roles and the real movie will come later. Apart from Paltrow, the line-up includes Matt Damon, Kate Winslet, Laurence Fishbourne, Marion Cotillard, Elliot Gould and Jude Law. Paltrow and Winslet get polished off with indecent haste, which means their names are attached but the producers don’t get stuck with so many day rates. This is fiscally sensible but does nothing for the film and after the third star makes an entrance it all gets very distracting. 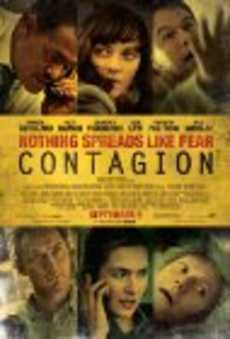 Many of the storylines make no sense and have no impact on the essence of the film. There’s a bizarre kidnapping sequence which we know is serious because the music gets very loud, but this story thread disappears for an hour and when we see the kidnappee next she’s having a great time teaching Chinese children speak English. Even more superfluous is the part Jude Law plays in all this. He’s a British journalist who, for some unknown reason, is angry at everyone and who manages to find a vaccine for the mystery virus without so much as a fiddle with a test tube.

There are a lot of situations that seem to be thrown in just for the hell of it. For about five minutes, we get scenes of the population rising up and causing carnage on the streets, but this is never woven into the story and from here we quickly move on, never to return. Also out of place is a scene when an autopsy is carried out on Gwyneth Paltrow. There’s no warning that this is going to happen so obviously the producers did their research and discovered that there’s nothing more likely to whet an audience’s appetite than the grisly process of Ms Paltrow getting scalped. Unlike the rest of the scenes, this one goes on for way too long.