In a big screen bid to have your designer duds and wear them too, Confessions Of A Shopaholic and its airhead consumer junkie protagonist played by Isla Fisher, never ring true. Mainly because the irritating phony premise critical of the shopping addictions of rabidly predatory bubblehead female mall stalkers with too much lipstick, while fabulously flaunting the shameless product placement of nearly every designer label that’s all the rage at the moment, says more about that materialism Hollywood is mired in while going through the motions of ambivalent finger wagging, than anything else. In other words listen up, but just kidding.

Isla Fisher is Rebecca Bloomwood, the goofy and frantic magazine writer who seems to spend more time running around town emptying boutiques of their merchandise while maxing out her cards and chased down by creditors, than holding an actual job. When her magazine folds and with limited prospects, Rebecca ends up by default applying for a position at a financial rag with an accent on sensible penny pinching. For some unfathomable reason known only to the editor Luke Brandon (Hugh Dancy) and not a single additional soul on this planet, the loony lady lands the job and proceeds to fake it as a budget maven. No wonder magazines are folding.

Directed by P.J. Hogan (My Best Friend’s Wedding) and based on the Sophie Kinsella penned Confessions Of A Shopaholic and Shopaholics Take Manhattan, the movie does have its moments. Including store window mannequins that come alive, luring Rebecca into senseless spending, and surreal candy-colored sets reflecting the world through her eyes, of enchanted surroundings teeming with gaudy seductive furnishings and glittery garments galore. 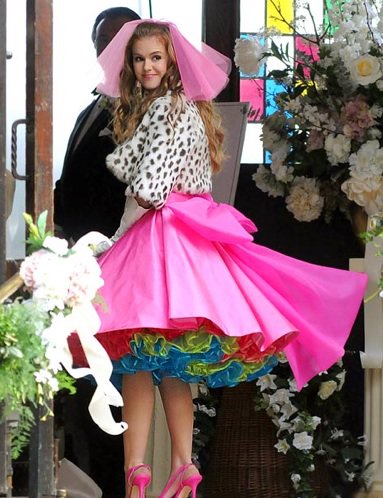 There’s also a really sensible cautionary introductory voiceover lamenting just how shopaholics navigating chronic debt servitude, in particular females, are brainwashed from childhood to heed the call of the mall like a drug. And where love of possessions is even better than romance because ‘a man will never treat you like a store’ and ‘you can’t exchange him after a week, for something better.’ But those fleeting pearls of wisdom while neither Rebecca nor this movie seem to be taking one’s own advice, soon raise suspicions as simply a terminally silly setup for turning attention to whatever overpriced pearls beckoning from a store window.

If Confessions Of A Shopaholic hadn’t likely been conceived before the dismal economic crisis we’re stuck in right now, the verdict on this movie would be that it’s deplorably irresponsible. In any case, the conspicuous consumption gullible way of life purchased with money that doesn’t actually exist and which this movie’s mindset is pretending not to promote, surely has more than a little to do with the mess this nation is in right now.