The original Conan was made in 1982 but, amazingly, thirty years on, not one of the writers, directors or producers of the 2011 remake have been able to come up with one single new idea. The entire film is simply an endless barrage of special effects and sword fights, making it more like a video game than a movie, and watching someone play on their computer for two hours is about as tedious as life can get.

Conan (Jason Momoa) is born on the battlefield and trained by his father to become a fierce warrior. He is still a young boy when his village is invaded by the tribe of the supernatural Khlar Zym (Stephen Lang), who makes Conan witness his father’s agonizing death. Conan keeps this memory with him and, when he reaches manhood, seeks out Khlar Zym to make him pay for the tragedy that befell his father and his tribe. 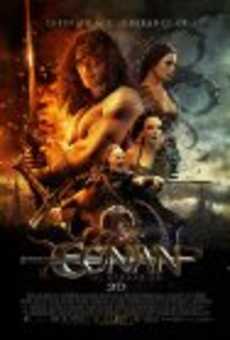 The new Conan is 6’5″ and loaded with charisma, but his talents are never explored and all he does is grunt his way along his violent path, swatting off bands of marauding warriors like flies and, of course, picking up a young maiden along the way. The latter storyline obviously supplies the obligatory love interest for our hero and makes it all very Tarzan and Jane-ish but, without so much as a single cute monkey to entertain us, it’s all just one big yawn.

There is an interesting dynamic between Khlar Zym and his daughter, who is obsessively jealous of her dead mother and desperate to take her place as Witch #1. Khlar believes he can resurrect his wife through his battle with Conan, so these conflicting desires present intriguing possibilities for treacherous plot twists and double-dealing, but instead warring emotions are replaced by ghosts and snakes and anything else the computer graphics team cared to come up with. This cauldron of bric-a-brac dilutes the essence of the conflict that sent Conan on his journey and the impact between the two giants falters and never lives up to the climax the concept promised in the opening battle.

As we all know, Arnold Schwarzenegger’s career was launched when he starred in the original Conan and it’s possible that the relatively unknown Jason Momoa will follow in his footsteps, which must be a worrying thought for Mr Momoa’s partner and mother of his two young children. However, on the up side, Jason was born in Hawaii, so there’s always a chance he might follow in the footsteps of that other well known politician with the same birthplace, who has also claimed new lands as his own and who is, undoubtedly, too smart and upstanding to ever get caught with his pants down.