While most biopics about women linked to legendary men focus on obsession and female neediness, the suspicion does arise, connected to a history of thwarted female lives through time – did these women desperately want to be with those men, or be them? Following in the path of musical assistant Anna Holtz in Agnieszka Holland’s Copying Beethoven or more recently Jane Campion’s Bright Star, about John Keats’ worshipful lover in longing, Fanny Brawne, French director Anne Fontaine’s Coco Before Chanel traces the troubled life of the famed clothing designer noted for an unstoppable drive to smash gender and garment ceilings alike.

Dumped as a child at an orphanage at the turn of the 19th century by her womanizing pots and pans peddler dad after her mother dies from a broken heart, a profoundly cynical Gabrielle nicknamed Coco (Audrey Tautou), quickly figures out that workingclass women at that time had two choices. To live off a man, preferably of the filthy rich variety, or decipher how to scrounge for a living on one’s own, by sheer wits, con and/or ingenuity.

Chain smoking and wise cracking her way through gigs as a pub performer and seamstress while fictionalizing her past to hedge her bets with potential well heeled lovers, Coco begins to take spontaneously negative note of women’s lot as silly decorative scenery for male visual pleasure, and burdened with too much makeup, feathers and corsets. And with a naturual eye for fashion, this no frills woman is soon donning her faithless lovers’ clothes and losing the ‘pastry shop with hanging silverware’ look. This, while combining then female sensibility and a liberated mannish elegance, promoting a transition to casual comfort that would come to mark her groundbreaking clothing style for women. 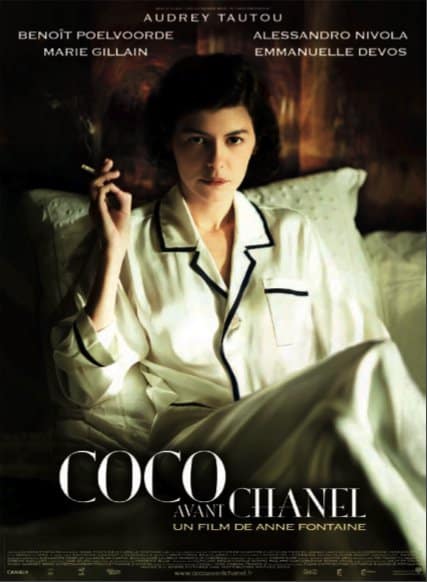 But these historical notions emerge primarily through vague inferences in a far too hermetically conceived film. In other words, if one were unaware of the radically transforming history of women in progress back then, they might conclude that Coco was the only female on the planet touched by a new self-assertiveness. Rather like an only partially assembled garment minus any defining accessories.

It’s also of interest to note that Gabrielle curiously assumed the nickname Coco bestowed upon her by the father she despised, a sound he made to wake her in the morning, imitating the cock-a-doodle-doo of the cocks crowing. And whether a subconscious impulse was perhaps at work symbolizing her cocky offensive against the male dominated culture around her, or something more on the order of penis envy, this film is not likely to be referenced as a source of viewer enlightenment.