Clash of the Titans is described as an action, adventure, drama, fantasy, and is set at the time when gods ruled from Mount Olympus and myths and legends were created. Warner Bros portray this celestial world perfectly and, like our hero, never waiver from their quest.

After a brief intro, the film follows Perseus as he fights his way through unholy demons, outwits crowing witches, wards off fearsome beasts, overcomes the kracken, triumphs over the god of the underworld, beheads the dreaded gorgon and, in his final battle, saves Princess Andromeda from sacrifice. The action never stops, with clash after tumultuous clash erupting by the minute, all of which will make this most dazzling extravaganza into one of the most brilliant video games ever. But unfortunately, as a film, it sucks.

From encountering these titanic gods we should be able to recognize archetypes that exist in our world today and the mythical tales of power-play, driven by greed and lust, should resonate and make us wonder how little we have all really changed. But only lip service is paid to the character interaction and all energy is reserved for costumes, make up, the most creative sets imaginable and of course the special effects that dance and erupt sequence after sequence. Personally, I’m hoping the global audience will soon tire of all this paraphernalia and come to the conclusion that once you’ve seen one, you’ve seen them all. Unfortunately, I think I could have a long wait. 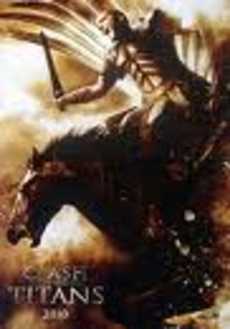 However, on the positive side I must say I think Liam Neeson is far more attractive with long wavy hair and I did enjoy the part when Perseus leads his posse into Medusa’s temple. Even with all those unflattering snake-locks Medusa is still a bit of a stunner, but every time a guy tries to hit on her she gives just the one look and he is turned to stone, mid-action. It really is a hoot.

Not so much of a hoot is wearing those annoying 3D glasses which aren’t particularly comfortable and certainly don’t contribute to a relaxing movie experience, which is what it’s supposed to be. The woman sitting next to me had to put hers over her own glasses and they wouldn’t stay on so she watched it without and said it really didn’t make much difference.

The studios really need to think about those two facts before they lavish millions of dollars on their next remake (sorry, project). And from a hygienic (OK, phobic) point of view, if they supply wet-wipes at Supermarkets to clean cart handles where other people’s hands have been, why can’t they do the same for glasses where other people’s hair has been? The more you think about it the more disgusting it gets. Yuk.

This 2010 version really compares badly to the original, released in 1981, which was an enchanting experience. There were, of course, very few special effects but there was a lot of story and, call me old fashioned, that’s what I expect when I go to the cinema. If it was a video game I wanted I would stay home, which is just what I think I’ll do for my next 3D experience unless, of course, the studio wants to splash out and divvy up for a couple of germaphobe-friendly wet wipes.