A movie about female courage that’s already attracting as much sexist disdain from the good ol’ boys club of 95 percent all-male movie critics, as women seeking the highest offices in the land – whether Democrat or Republican – Clint Eastwood’s Changeling is about as feminist as Hollywood can get. And the dubious reception by male critics of this real life story of a 1920s devoted LA mother and – gasp – management level career woman – who was brutally duped and persecuted by the male state authorities, is equally telling of how little has changed into a new century.

The title derives from fable lore, referring to an ugly or crafty little creature left behind by fairies, in place of a child stolen from its mother’s cradle. In the actual case of LA’s notorious Wineville Chicken child murders, single working mom Christine Collins (Angelina Jolie), returns from her job as an efficiently take-charge phone company supervisor on roller skates one day, to find her only child, nine year old Walter, missing. And while an indifferent police department takes their time getting involved, they orchestrate huge media fanfare six months later under pressure to solve the case, by producing a runaway boy located in Illinois. And whom a distraught Christine insists is not her son. 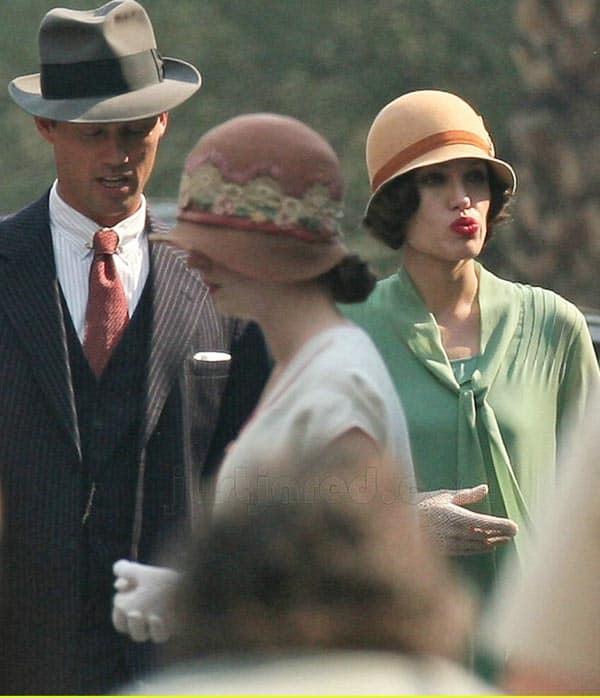 But the corrupt LAPD, not up to facing an embarrassing situation even though this ‘Walter’ is three inches shorter than her son (an alleged child psychology consultant is brought in to assert that trauma can shrink a kid), pushes Christine to relent and bring this boy home ‘on a trial basis’ because she’s too upset to be rational. And when she continues to make a fuss about being handed a bogus boy, and is backed up by local activist Presbyterian minister, Reverend Gustav Briegleb (John Malkovich), the LAPD disappears Christine, spiriting her away into forced secret custody at a local psycho ward. And where she will face being drugged, straitjacketed, electroshocked and lobotomized, just like so many other women deemed difficult or rebellious through the first half of 20th century. That is, unless she agrees to sign papers presented to her by the presiding shrink, absolving the LAPD and agreeing with them that this child handed over to her, is Walter. And Christine, facing the most heinous mental and physical torture by the psychiatric authorities in league with the LAPD, courageously refuses and resists.

Noteworthy of mention regarding the politics of psychiatry in relation to this brave film, especially in connection with the institutional persecution of females, is that this was a time when women began to liberate themselves from second class citizenship, both during WWI when assuming male positions on the domestic front, and as the women’s suffrage movement gained steam and finally became a reality in 1920, with the 19th Amendment. This, in the context of the Roaring Twenties, though it was in many ways no howl for women. Because as they became more outspoken and independent-minded, the male establishment in turn devised new methods of female disempowerment, of which the mental hospital was key.

And today, there can be found many elderly women forced into mental hospitals back then and warehoused for a lifetime (until no longer capable of functioning in the outside world), precisely for being difficult, rebellious, ‘uncooperative,’ or simply ‘inconvenient.’ In other words, a dumping ground by parents of free thinker daughters, or husbands with a yen for a new woman.

And in harrowing scenes of mentally incarcerated and warehoused women in Changeling, that infliction of medical torture in order to break female spirits and enforce obedience, is most alarming because it’s all true, and really happened on a secretive and routine basis. In devastating scenes between Jolie and an inmate played by Amy Ryan, the latter gives Jolie a crash course in what’s been going down, and how she herself ended up there after trying to file charges of police brutality.

And Clint Eastwood is to be praised for bringing this buried history to light, a rare glimpse that picks up where the 1983 biopic Frances, about the scandalous mental institutionalization of Hollywood star Frances Farmer (played by Jessica Lange), in large part for her radical politics, left off. It was indeed a Dr. Walter Freeman, who pioneered the trans-orbital (through the eye) lobotomy with an ice pick, who in 1948 stuck that very implement into the head of Frances Farmer.

And it wasn’t that long ago in time, that medical researchers openly concurred that women had smaller brains therefore unsuited for professional vocations – a male-imposed cultural expectation which Christine Collins was clearly defying, and evidently paid the price. This, while the General Psychiatry archives reveal conclusive agreement that domestic violence is not only acceptable but even therapeutic, with “the husband’s aggressive behavior as filling masochistic needs of the wife and to be necessary for the wife’s equilibrium.”

And politicizing so-called psychosis has a deep-seated history in this country. Dr. Benjamin Rush, one of the signers of the Declaration of Independence, concocted the medical term ‘anarchia’ as a category of ‘insanity’ in order to negatively label the many Americans at the time who were unhappy about the limits of that document, as it did not address issues like any human rights for other than white men with property, not to mention the existence of slavery.

Dr Rush also addressed the discontent of slaves by declaring a mental disease called ‘negritude.’ And by announcing that there was no cure for this condition, but that the ‘disease’ could be contained by isolating black people from the ‘healthy’ white population, the medical profession in effect initiated and legitimized segregation, a scourge that would not be outlawed until several centuries later.

And similarly, Louisiana physician Samuel Cartwright added ‘drapetomania,’ to the shameful lexicon, a mental affliction supposedly causing slaves to attempt to escape. Whipping and toe amputation were prescribed to plantation owners as effective cures. A seasoned Hollywood screenwriter couldn’t make this stuff up.

Clint Eastwood also opens up a provocative fact-based second front in Changeling, as he exposes the sinister historical roots of notorious LAPD excess. It is Malkovich’s fiery protesting Pastor Briegleb who sketches out that dismal extra-legal chronicle of events from his pulpit (and on radio), denouncing the LAPD ‘Gun Squads’ of the period who performed covert executions and littered the city with bodies. And not to stamp out crime, according to Briegleb, but to destroy ‘competition’ for illegally gotten gain. The death squad nature of the LAPD back then, was in essence a post-wild west urban counterpart to the 1920s second wave of Klan rural vigilantism.

The Changeling, though compromised in part by Jolie’s odd combination of an often stiff, robotic performance with excessively melodramatic emoting, along with J. Michael Straczynski’s overly long script, is exceedingly rare, enormously commendable and daring filmmaking emerging from Hollywood. And a work resonant with an integrity and uncompromising truth certain to give the best of the outsider indies a run for their money.