When a movie opens with an absolute assurance that what you’re about to watch is “A True Story” you certainly expect to see a historical drama far more credible than the patently absurd Changeling. Perhaps, if director Clint Eastwood had qualified the claim with words like “Based upon” or “Inspired by,” the picture’s preposterous premise might have been a lot easier to swallow.

The point of departure is March 9, 1928, which is when we are introduced to Christine Collins (Angelina Jolie), a single-mom raising a nine year-old (Gattlin Griffith) in the City of Los Angeles. By profession, Christine roams around the floor of the phone company on roller skates as the supervisor of a bank of operators.

The plot thickens the fateful Saturday she agrees to fill-in for a co-worker, leaving little Walter home alone. By the time she returns after the shift, the boy has vanished without a clue, so she calls the police to file a missing persons report.

Several months later the cops seem to have solved the mystery, as they announce that Walter’s been found alive and well in DeKalb County, Illinois and that he’s on his way back to L.A. by rail. However, Christine’s hopes are soon dashed when she sees that the child who disembarks from the train is an impostor (Devon Conti) who’s four inches too short.

Now, this is where the movie starts to make no sense. Instead of accepting the mother’s simple assertion that this was not her son, we’re led to believe the LAPD instead pressured Christine to take custody of a perfect stranger because the department was more concerned with getting positive press coverage for cracking the case than with reality. 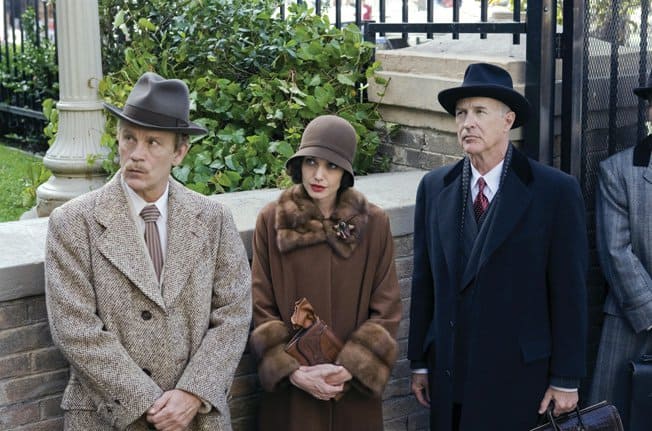 Doesn’t that sound inhuman? And how long could a young impersonator keep up such a charade, even if he had wanted to? Wouldn’t the fraud have been exposed the first time “Walter” went out to play with his friends, visited relatives, greeted neighbors or returned to school and was unrecognized by his teachers or classmates? Something simply doesn’t add up here.

Be that as it may, the authorities’ reaction to Christine’s offer of physical evidence is to have her committed to a mental institution, rather than to ascertain the accuracy of such readily verifiable claims as whether or not her son was circumcised. And a grassroots movement led by Reverend Gustav Briegleb (John Malkovich), a corruption-fighting crusader, apparently had no impact either.

Only when a mass grave with a score of bodies is uncovered on the ranch of a serial killer (Jason Butler Hamer), does anyone in power start to believe Christine might not be psychotic after all. Released from the institution, she enlists the bro bono assistance of a hotshot attorney (Geoffrey Pierson), and the dominos start to fall as the careers of the Mayor (Reed Birney), Chief of Police (Colm Feore) and a Captain (Jeffrey Donovan) crumble in the wake of a well-publicized, review board hearing.

Regrettably, neither the painstakingly recreated period backdrops nor an abundance of inspired performances outweigh Changeling’s fatal flaw of resting upon a totally fanciful conceit, pretensions to the truth notwithstanding. A crime saga strictly for the very gullible.

To see a trailer for Changeling,