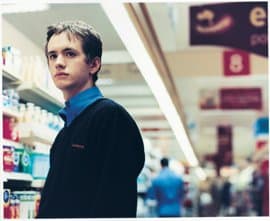 Ben Willis’ (Sean Biggerstaff) senior year of college was so disrupted when his girlfriend Suzy (Michelle Ryan) unceremoniously dumped him that he developed an incurable case of insomnia. Because he’s unable to sleep since, the crushed art major decides to take a job working the overnight shift at a nearby supermarket.

Finding himself surrounded by loser co-workers he had little in common with, like daredevil Barry (Michael Dixon) and slacker Matt (Michael Lambourne), Ben begins retreating into a fantasy world where he focuses on appreciating the female form in a fashion supposedly similar to the classic artists who painted and sculpted nudes in an earlier age. 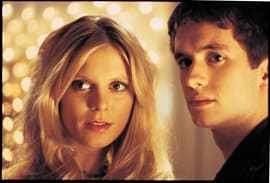 Lucky for him, he inexplicably develops the superhuman ability to freeze people right in their tracks, a power he employs to strip attractive young female customers with hourglass figures naked on the spot. It also comes in handy to use on Sharon (Emilia Fox), the shy and retiring checkout girl with a perfect 10 bod he’s been admiring from afar.

This cheap sexploitation is about as deep as it gets in Cashback, a picture which is impurely designed with a teenage demographic in mind. Ben explains the throwaway title when speaking matter-of-factly about the quid pro quo relationship which underpins his eight-hour a day employment, “I give people my time, and they give me money, cash back.”

The movie is actually a full-length adaptation of an 18-minute version which was nominated for an Oscar in 2006 in the Best Short Film category. Written and directed by Sean Ellis, it still features the same principal cast as the original, but is unlikely to garner any Academy Award buzz this go-round. Not that it won’t develop a cult following among the peach fuzz set it has tightly targeted. 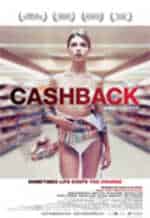 FYI, the plot doesn’t make any sense if you really stop to think about it. But neither do the supernatural elements of your typical sci-fi adventure. This just happens to be a voyeuristic fantasy sans character development which resorts to a dumb device to enable the horny protagonist to remove clothes and leer lasciviously. While the camera might linger on boobs and pubes long past the point of what might be consider good taste in polite society, this flick ain’t for that crowd, unless they’re willing to give cinema ordinarily considered sleazy the same pass as the work of the Great Masters celebrated simply for their nudes.

Guaranteed to be a hit with onanistic adolescent boys blinded by raging hormones.