A bittersweet confection casting a rare gaze upon the pleasures, sorrows, longings and romantic desires of Arab women in the Middle East, Caramel (Sukkar Banat) is a rich dramatic blend steeped in a contrasting mix of rebellion and ritual in Lebanon. Defiance contends with deference in a nearly but not quite collective feminist impulse, as both comic and tragic gender identity conflicts that are internal rather than military in this long war torn region, play out in that universal female sanctuary, the beauty salon.

Director and co-writer Nadine Labaki also stars in Caramel as Layale, the attractive young owner of the Beirut beauty shop who’s in heartbreak mode at the moment, having a self-destructive affair with a married man. Taking frequent unscheduled breaks from the shop for quickie afternoon love trysts, to the concern and dismay of her female employees, Layale has also caught the eye of a local infatuated neighborhood cop (Dimitri Staneofski) who’s interested in a lot more than just her erratic driving. 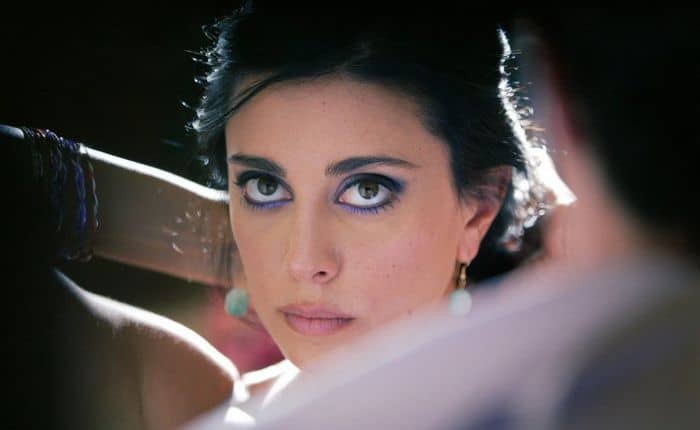 Among the supportive surrogate family of girlfriend workers and customers alike at the beauty parlor, with their own set of sexual issues, are Rose (Sihame Haddad), a lonely older woman saddled with caring for her mentally disturbed sister who wanders the streets; Rima (Joanna Moukarzel), whose unusually affectionatelly administered hair care may conceal a forbidden same-sex longing, in particular for a far too frequent customer imprisoned by religious tradition when mulling cutting off and styling her long hair; Nisrine (Yasmine Al Masri), a young woman about to be married and dreading that her husband will discover she’s no longer a virgin, and so she seeks a horrific remedy; and Jamale (Gisele Aouad), an older menopausal actress obsessed with preserving her looks, who frequents the beauty salon in desperation to keep up with the younger competition. Which includes, pathetically, dabbing her skirts with pigeon blood when attending auditions, in order to impress that she’s still menstruating like the others.

Caramel is a candid and heartfelt ensemble creation. The predicaments of these women may not in most of these cases feel familiar to those Western been-there-done-that women somewhat higher on the liberation evolutionary scale. But there’s a vividly expressed compassion, recognition and humanity that cannot be denied.