Borat, a shock comedy chronicling the misadventures of a crass journalist from Kazakhstan as he traveled across the U.S., was, in this critic’s opinion, the funniest film of 2006. Its star, Sacha Baron Cohen, landed an Oscar nomination for writing that faux documentary which employed a controversial bait-and-switch casting style to dupe a series of unsuspecting straight men to unwittingly make absolute fools of themselves.

Wonders do cease. For now, Cohen is back as another jaw-dropping, title character, Bruno, an aggressively-gay Austrian who comes to America to conquer Hollywood. But where Borat brilliantly employed an experimental approach to guerilla moviemaking, that cinematic innovation already feels played out in this derivative sequel. The film’s fatal flaw rests in the fact that, this time around, virtually all, if not all of the participants were obviously in on the joke.

This begs the question, if Cohen is not posing as gay here to elicit authentic, homophobic responses to expose bigotry, what exactly is his reason for filling the screen with the feigned reactions of folks pretending to be outraged by Bruno’s flamboyance? Unfortunately, his over the top antics seem designed more to inflame passions and thus encourage gay-bashing than to teach any sorely-needed lessons about tolerance. 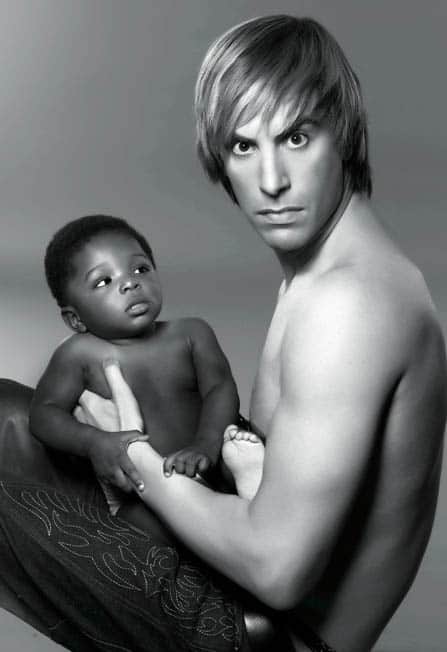 For example, very effeminate Bruno takes an orphan he’s adopted overseas onto a Jerry Springer-ish TV talk show and informs the host that he has given the toddler a traditional African name, “O.J.” In addition, the child is dressed in a shirt emblazoned with the word “Gayby,” suggesting that he plans to raise the boy to be a homosexual. Such a deliberate provocation proves to be red meat for the mostly black audience which predictably erupts into rage.

Equally offensive are the moments when Bruno exhorts supermodel Heather Hahn to “Put your shoulders back” as she struts up the runway because “This is a fashion show, not a slave auction,” or when he says he wants to “to be the biggest Austrian superstar since Hitler.” Later, he pressures American Idol judge Paula Abdul to sit on a Mexican, and he makes an awkward pass at Congressman Ron Paul in a hotel room.

Because these scenes seem staged and certainly aren’t funny, one has to wonder what emotions these awkward interactions are supposed to be evoking you, for Bruno is neither likable nor clever, just a terminally-annoying jerk. A downer calculated to set back gay-straight relations amounting to an over-indulgence in exploitation and vulgarities of no redeeming social value.