Movies about the traumas of US wars seem to fare better when sticking to the more familiar turf of what is going down dramatically on the home front, rather than in conflict abroad. And Brothers, like the fractured psyche of its combat soldier protagonist played by Tobey Maguire, gets it more than right while penetrating the tragic fallout from post-traumatic stress disorder, but shatters and loses its way while conceptualizing contrived war zones far away. 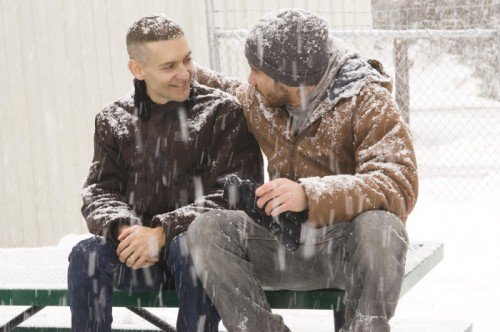 When the family gathers for a tense farewell dinner where Sam’s devoted wife Grace (Natalie Portman)and two small daughters Isabelle (Bailee Madison) and Maggie (Taylor Geare) prepare for his departure for Afghanistan, Tommy is invited to join them as an unwelcome guest. The gathering quickly escalates from awkward to confrontational, as Hank makes little effort to conceal his contempt for a wayward son returning home, and his favored child heading off into harm’s way.

When Sam’s plane is later shot down in Afghanistan and Grace receives news that he’s dead, Tommy is filled with rage towards his family for encouraging Sam to join the military in the first place. But protective feelings towards his brother’s brokenhearted widow and her children soon evolve, and eventually blossom into a barely suppressed attraction between Tommy and Grace that is increasingly difficult to resist. And when Sam is eventually found alive and freed from captivity and torture by the Taliban, he returns him to a situation fraught with looming psychological turmoil.

Scenes between Maguire and Gyllenhaal emotionally detonate with a rare passion and intensity on screen. But which unfortunately render the scenes of military conflict artificial and unconvincing in comparison. It’s as if Irish director Jim Sheridan may have been more subjectively focused on personal trauma of his own related to the history of terrorism back in his homeland than a determined scrutiny of the Afghan resistance, which plays out as exaggerated caricatures with no basis in logic or reality connected to current events.

The result is a compassionate crafting of lost and found families in wartime, but a seemingly self-censored scenario with the US military establishment and its combat rationale as the troubling invisible elephant in the room. This, while foot soldiers and insurgents alike are set up as the fall guys for precipitating the horrors of war and its psychological scars, not the institutions destroying human beings in the first place, by cultivating in men the concerted impulse to legally engage in murder.