Whenever a six-time Oscar-nominee makes a new movie, its release is invariably eagerly anticipated. Such is the case with Jim Sheridan, the Dublin-born director and scriptwriter of such emotionally-draining sagas as My Left Foot (1989), In the Name of the Father (1993) and the semi-autobiographical In America (2002).

Unfortunately, he fails to regenerate any of that trademark intensity in Brothers, a disappointing remake of Brodre (2004), a disturbing examination of the repercussions of war as felt by a Danish military family. As is often the case with remakes of foreign films, a lot gets lost in this English-language translation, an emotionally-eviscerated, watered-down version given to melodramatic outbursts and myriad inappropriate moments of levity.

Jake Gyllenhaal and Tobey Maguire share the title role here, playing polar opposites cut from a couple of simplistically-drawn, antagonistic archetypes. At the point of departure, we meet ne’er-do-well Tommy Cahill (Gyllenhaal), a criminal who is just being paroled after serving time behind bars for committing a bank robbery. He is picked up from prison by his big brother, Sam (Maguire), a straitlaced Marine Captain.

Boy-most-likely Sam is blissfully in love with his high school sweetheart, Grace (Natalie Portman), and together the former football star and gorgeous cheerleader are raising a couple of adorable daughters (Bailee Madison and Taylor Geare) in a picture-perfect, suburban home surrounded by the proverbial picket fence. The fly in the ointment spoiling their sickeningly-sweet utopia is the stop-loss order sending the Afghan War veteran back overseas in less than a week. 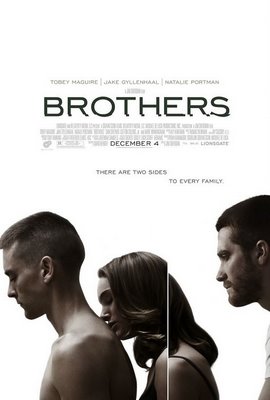 Prior to Sam’s departure, we witness the sharp contrast between his and Tommy’s status inside the Cahill clan. Whether it’s little Maggie letting it slip to her Uncle that “Mom doesn’t like you,” or family patriarch Hank (Sam Shepard) directly challenging him with “Why don’t you try mimicking your brother for a change?” the ex-con can’t catch a break. Meanwhile, nobody wants solid as the Rock of Gibraltar Sam to leave, with his girls, his wife and his mom (Mare Winningham) each taking turns to lay a guilt trip him on him about abandoning them again. Nonetheless, following a man-to-man exchange with his retired military father, the duty-bound soldier stoically grits his teeth and ships out with his unit.

What follows the establishment of this promising premise is bizarre beyond belief. First, Sam is taken prisoner when his helicopter is shot down in the mountains of Afghanistan. Inexplicably, he is subsequently reported as “Killed in Action” rather than as “Missing in Action,” a highly-improbable presumption which sets off a chain of events that plays out like a perverse variation of the Biblical parable of the Prodigal Son.

For, seeking redemption, Tommy finally matures, and proves handy around the house while offering his grieving sister-in-law a little more than a shoulder to lean on. Even his nieces suddenly love him to pieces, as they appreciate the presence of an attentive father-figure capable of patiently playing along with their childish pranks. He is supportive of mischief ranging from flipping pancakes onto the floor to dumping a gallon of paint onto the crotch of a contractor, everything short of launching the girls in a helium-filled balloon.

Then, just when it looks like everybody’s adjusting to life without daddy, the plot predictably thickens when guess who is miraculously resurrected. Sam returns strung out with Post-Traumatic Stress Syndrome-induced anger management issues soon to be exacerbated by suspicions that his wife’s been cheating on him with his brother. Again and again, the audience at my screening failed to take this development seriously, laughing out loud in unison during anxious confrontations meant to be tense instead of comical.

A farfetched soap opera better suited to The Jerry Springer Show than to the big screen.

To see a trailer for Brothers,