In yet another pitiful case of taking the indie out of the filmmaker and dropping him into Hollywood (we’re taking Gary Winick, director of a little gem called Tadpole), you end up with a dreary disaster like Bride Wars. With its unfortunate PG rating hopefully not targeting this bridezillas from hell unintentional horror fare as a training manual for the pint sized female set, the film posits the unseemly notion that next to every self made man, is a selfish made woman.

Anne Hathaway and Kate Hudson excel at embarrassing themselves as two lifelong best friends coincidentally planning simultaneous weddings at NY’s posh Plaza Hotel, that end up on the same day as a result of a booking error by the incompetent wedding planner (Candice Bergen). And since the Plaza Hotel happens to have been reconceived after renovations, the original landmark is as reinvented in this sour tale, as the sexy shrews standing in for realistic women on the planet 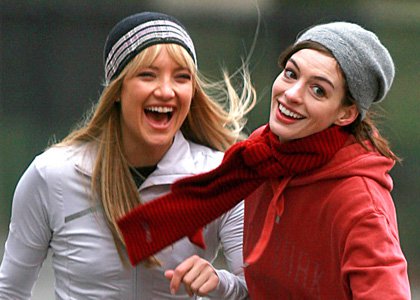