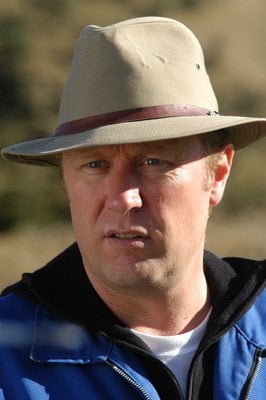 I wonder whether the Wayan’s Brothers knew when they made Scary Movie back in 2000 that their parody would spawn a cottage industry of spoofs of horror flicks. Besides Scary Movie 2, 3 and 4, we’ve also had such praiseworthy offerings as Shaun of the Dead (2004), Mad Cowgirl (2006), Planet Terror (2007) and Severance (2007).

Black Sheep, representing New Zealand’s contribution to the popular genre, revolves around an experiment in genetic engineering gone horribly wrong. The story is set on a picturesque farm owned by Angus (Peter Feeney) and Henry Oldfield (Nathan Meister), siblings whose herd morphs into a horde of bloodthirsty man-eating zombies after a couple of well-meaning environmental activists unwittingly release a mutant lamb into the midst of their flock. 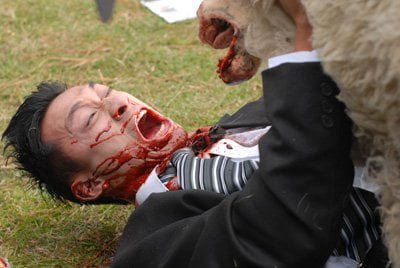 Rather than hitting you over the head with obvious jokes, Black Sheep relies on a tongue-in-cheek brand of humor which calls for a little sophistication. But that doesn’t mean it’s always in good taste, especially when you have such sordid goings-on as a sheep raping a man, dining on “mountain oysters” (aka sheep gonads), and fairly graphic displays of gore when the voracious woolly beasts attack. 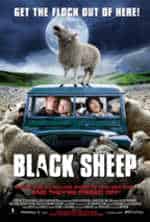 Shot on verdant, rolling hills off the coast of Wellington, the most memorable aspect of this movie might be the cinematic capture of its bucolic setting. While a tad too understated to satiate the simplistic blood lust of the masses, Black Sheep still is clever enough to earn the appreciation of the egghead cult crowd.