This is a Spanish drama that has no idea what it’s about and, when you don’t know what you want to say, it’s usually better to make it snappy and get the hell out. Unfortunately, this filmmaker does the exact opposite and loiters for exactly two hours and twenty minutes, by which time it’s debatable as to whether the melodic lilt of the Espanola tongue will ever sound the same again.

Uxbal (Javier Bardem) is separated from his unstable ex-wife and has custody of his two young children. He oversees a small underground empire alongside his brother and a Chinese businessman. The three deal in counterfeit goods and construction, both of which are supplied with their illegal immigrant work force.

No one can play broody better than Bardem and, as meandering as this film is, his presence does create a tone of desperation that helps carry his tortured tale through. His dark side also fits in well with his dealings in the trafficking of humans but, by the same token, risks us not liking him, so his tender side is brought out in his relationship with his two little children, to whom he is a caring, devoted father. This endears him to us and assures us that, even on his worst day, he would balk at the idea of putting someone’s cat in the microwave. 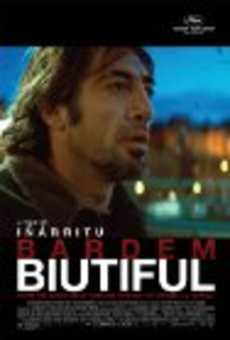 Uxbal just can’t catch a break in this film. He has work, health and family issues and lives below the poverty line in total squalor while his brother, who is also his business partner, enjoys large Jack Daniels, thonged dancing girls and enough cash to be able to tip big. Maybe Uxbal should lighten up a little, take some time out to catch up on a few TV shows, and then he’d realize that somewhere along the line he’s getting screwed because middle management crime bosses usually do very well for themselves, as anyone who’s watched the Sopranos knows.