Certified by the Guinness Book as the largest Chinese restaurant in the world, West Lake Restaurant is quite a sight to behold. Located on a scenic site in the heart of Southern China, in Changsha, the capital city of Hunan Province, the mammoth establishment can seat as many as 5,000 inside its spacious pavilions.

There, customers are waited on hand and foot by attentive waiters and waitresses, most of whom, ironically, are undernourished and live nearby, a half-dozen or more to a room, in cramped, company-owned dormitories. Despite their low wages and generally dire straits, the 1,000 employees begin each day by putting on their best faces to chant enthusiastically “Work as a team! Do our best!” in unison for their boss Qin Linzi.

The food is cooked in 5 kitchens by 300 chefs, each carefully trained in the Chinese culinary arts, and masters of an array of entrees ranging from the ordinary to the outright bizarre. While West Lake’s most popular dish is goat with rice pasta, there are some which call for a strong stomach, such as the dish featuring slithering slices of fresh-killed snake and a deep-fried seafood delicacy which, when prepared correctly, arrives at the table with the head of an expiring fish still gasping for breath. 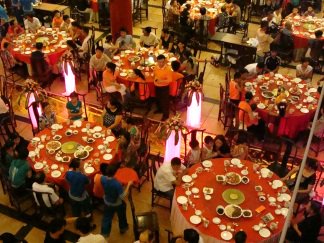 Most of the menu, however, is designed to satisfy the average palate. After all, as General Manager Xiao Yezi explains, her job involves ensuring that they have a steady supply of the staples, which means she must order about 700 chickens and 2,600 pounds of pork per week.

For the restaurant is routinely hired to cater to Wedding, Longevity and Baby Banquets, sumptuous feasts attended by hundreds of guests. But while the scale of everything connected to West Lake is certainly impressive, that is not what makes the place such a worthy subject of a documentary. Directed by Weijun Chen, The Biggest Chinese Restaurant in the World is a priceless picture which presents a captivating slice of current-day China, contradictions and all, while simultaneously celebrating many of the culture’s age-old traditions.

The movie revolves mostly around owner Qin Linzi who freely admits to being a member of the Communist Party and talks with pride about having built West Lake into a flourishing enterprise worth $30 million dollars. The question this immediately raises in the mind of the discerning viewer is whether her success is the result of business savvy or merely of her political connections.

Although much of Qin’s personal story is very admirable, such as her having had the wherewithal to divorce her abusive ex-husband, one still can’t help but ponder the fact that she doesn’t appear to treat her staff very well, considering that 20 people quit every month on account of their low salaries. Thus, one theme constantly simmering under the surface, here, is the tension of neo-capitalism and Maoism, and the obvious existence of many unfortunate victims of the country’s rush to modernism, several of whom, all struggling employees, we see interviewed briefly.

Nonetheless, besides this economic issue, the film engages the audience in the sheer beauty of the food preparation and presentation, and in the pageantry of the accompanying stage productions, replete with singers and dancers. The movie also goes to great lengths to explain in detail the meaning of the menu for each ancient ritual. For instance, a Wedding Feast calls for whole chicken and whole fish and lots of round ingredients. Why? These symbolize a perfect union and a well-round life.

By contrast, at a Longevity Banquet, thrown for a 60th or 70th birthday, you would find dishes like turtle with secret sauce, longevity pork (for good fortune), longevity noodles (for long life), round fried eggs (representing wholeness) and peach buns (for immortality). At a Baby Banquet, held when a newborn turns a month old, the focus is as much on gifts as on food, from a sword for conquering evil, to a silver locket for long-life, to a locket of hair to ward off evil spirits, to kissing a fish so the child will be articulate.

A brilliant examination of Chinese culture and cuisine which subtly uncovers a telling microcosm of the myriad contradictions that the communist nation has manifested en route to its embrace of elements of capitalism.

In Mandarin with subtitles.

There will be a special screening of The Biggest Chinese Restaurant in the World at the “Stranger Than Fiction” series held at the IFC Center in NYC on Tuesday, January 26th at 8 PM, followed by a Q&A session with the film’s editor, Jean Tsien.

To see a trailer for The Biggest Chinese Restaurant in the World, visit: