There’s a reason why a fourteen hundred year old poem like Beowulf has been passed along through the generations across centuries without even an actual writer claiming ownership, and it’s pretty much the same reason why a blockbuster like Beowulf is predestined to clean up at the box office. In an age when Christianity had not yet quite conquered the human inclination for the guilty pleasures of paganism, there was an irresistible urge, as Anthony Hopkins’ King Hrothgar so bluntly puts it in the opening moments of Beowulf, for ‘merriment, joy and fornication.’

And there’s a full plate of all that and much more in Beowulf’s high-tech motion capture hero worship myth spinning, swordplay, ale swigging and femme fatale black magic. Especially when you consider the source of all this nonstop one-size-fits-all 3-D spectacles screen sorcery, a retro brew collectively cooked up by the awesomely weird minds of director Robert Zemeckis (Back To The Future) and screenwriters Neil Gaiman (Stardust) and Rogery Avery (Pulp Fiction). 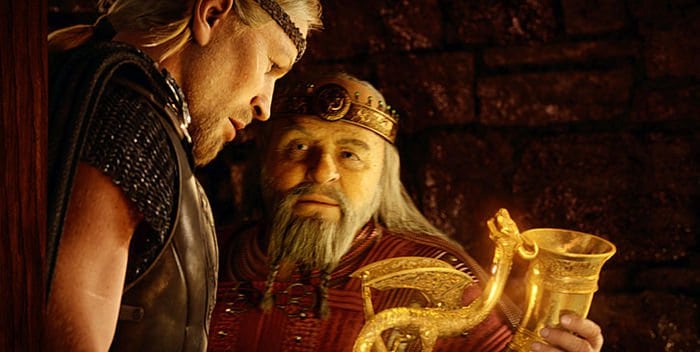 Beowulf opens with a scene of standard Viking revelry in an ancient Danish kingdom, as masses of medieval party animals get drunk and lose their cool. Even King Hrothgar, whose been hitting those mugs of mead too heavily, drops his holy drawers and gives the audience a 3-D in-your-face eyeful of his majesty’s bloated gut and backside, too much information. Enter the roaring monster Grendel (Crispin Glover), ten feet tall and dripping 3-D pus from oozing skin – seemingly right on top of the audience in row three – and looking like he stopped by to crash the bash and snack on assorted human heads.

The distraught king summons itinerant hero Beowulf (Ray Winstone) for monster removal, who eagerly accepts the assignment preferably in the nude, as he shows off what looks like pro-wrestling maneuvers on Grendel. The stunned beast calls time out for the moment, and retreats back to his cave where his nymphomaniac temptress mom (Angelina Jolie) soothes Grendel’s bruised ego, fondling him a little too incestuously with one of her tentacles while conversing with him in old English without benefit of subtitles.

After much bone crunching and gut piercing among the rowdy bunch, it comes to light that Mom’s nasty looking offspring are the illegitimate products of one night stands with humans succumbing to their more basic instincts. With cautionary intimations of tragedy brought upon the land by ‘sins of the fathers,’ there’s quite a loaded subtext here touching on birth defect rejects and creature outcasts, with ensuing Oedipal revenge. At the same time, the anxiety-ridden warriors wonder if they should turn to Christianity for better luck in life, but decide that vice is more fun. Without giving too much away, a dangerously seductive Angelina gets to have the last word as she wantonly upstages all this macho merrymaking.

The motion capture 3-D digital blend of humans and animation can come off as a mixed bag. Though swords seem to fly off the screen right into your eye sockets, or Beowulf’s bulging thighs look like they’re about to wrap around your throat while a pig roasting on a spit floats over row ten in the theater, there’s a contrasting feeling of characters whose digitalized forms are emotionally distancing. On the other hand, the actors must feel mighty pleased, in particular stocky Winstone with his body buffed and face-lifted animated Beowulf persona flexing his superhero synthetic biceps as he runs amok up on that hyperactive screen.