Born in L.A. on January 15, 1971, Regina King started her showbiz career on the stage with the Crossroads Theater which is where she impressed Marla “Florence” Gibbs enough to land a role as the TV star’s teenage daughter on the sitcom “227.” Five years later, Regina made the jump to the big screen, playing Shalika in fellow USC alum John Singleton’s Boyz n the Hood.

The versatile actress has since appeared in virtually every genre of flick, as indicated by a resume’ which reveals appearances in such diverse offerings as Ray, Down to Earth, Enemy of the State, How Stella Got Her Groove Back, Jerry Maguire, Friday, Legally Blonde 2, Miss Congeniality 2, Daddy Day Care and Poetic Justice. In 2005, Regina earned an NAACP Image Award for her spirited performance as Ray Charles’ backup singer/mistress Margie Hendricks in Ray.

A year ago, she filed for divorce from her husband of ten years, Ian Alexander, Sr. The couple have one child, Alexander, Jr. Here, Regina talks about her latest role as Lisa Whitfield in This Christmas, a holiday ensemble drama written and directed by Preston Whitmore. 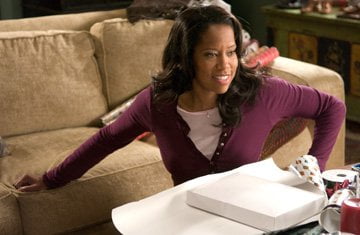 RK: When they asked about my interest, Loretta [Devine], Delroy [Lindo] and Idris [Elba] were already attached to the project. So that was the initial draw for me. And then, once I read the script, I thought it would be a challenge for me to play a submissive role.

KW: How would you describe Lisa?

RK: She’s a submissive woman whose husband [Laz Alonso] wants to start up a company. He’s not faithful, and she’s aware of these things, but she continues to stay in the relationship as, I think, a lot of women do.

KW: Did the fact that Rain Forest Films was making the film a factor in your choosing to sign on?

RK: The success that they had with Stomp the Yard definitely was something that fielded the possibility that their next film could have the same, if not better, success.

KW: How was it working with Loretta Divine?

RK: She’s awesome. I’ve known her prior to working with her on this film and she just has one of those infectious personalities. You just love to be around her, to talk to her and to hear her giggle. KW: What message do you want audiences to take away from this film?

RK: I hate to use the term message because I don’t think it’s just a message. I don’t think it’s so much of a message film, but I think it might be a reminder of how important family is. When the girlfriends and the boyfriends are gone and the friends are gone, at the end of the day, all you have is your family. You can’t change a sister; you can change a boyfriend or a friend, but you can’t change a sister or a brother or a momma.

KW: Did you like the fact that this was a holiday film about a black family?

RK: Yes, that was attractive to me, but the thing that was more attractive than that is that this happens to be a black family. That’s the subject of this film, but there’s nothing about the issues that we’re dealing with that are specifically black. Everything in this movie are things that translate – religion, color, language, creed, all of that. These things are universal, so that more than it being a black film is what attracted me.

KW: How did you find it working with crooner Chris Brown?

RK: It was really a treat working with Chris because when you go into a project where you’re working with a music person that’s trying their hand at drama, you always kind of approach it with a raised eyebrow because you want it to be good because your name goes on that, too. He’s such a charming young man and he really took advantage of an opportunity that I think a lot of people his age would take for granted. And he was able to have scenes that were emotional and bring tears to your eyes almost, with a heavyweight like Loretta. And that’s not an easy feat. Also, it was just great that he was allowed the opportunity in this movie to prove himself as a real singer. Most people, when you say Chris Brown, think of him as just a performer, a dancer with teenage songs. They aren’t really aware of how powerful his voice is. And he was able to really showcase that in this movie.

KW: What types of future projects are you looking for?

RK: I would like to continue to tell stories that aren’t just comedic or violent. Just as women, we’re so much more colorful than what is depicted on the big screen, so I would like to continue to pursue those types of stories. And my sister [Reina] and I started a production company, Royal Ties Productions, so we’re developing projects, so that we can do exactly that.

KW: What projects do you have in development?

RK: Right now, we’re working on a Shirley Chisholm story, and we are doing a black remake of The Big Chill.

KW: How do you see the industry changing in terms of opportunities for minorities?

RK: It’s definitely changing, maybe for the better in some places, and for the worse in others. So maybe it balances off, so there’s not much change. One offsets the other. But I’ve seen a lot more movies with Latina actresses, so I feel that we are moving towards seeing women of color represented on film more, which is always good.

KW: Do you think that Hollywood has a preference for lighter-skinned actresses of color over darker-skinned ones?

RK: Actually no, not really. I think it’s more of a pretty versus not-as-pretty thing, and what a studio head’s perception is of pretty.

KW: Would you accept a role that required nudity?

RK: I never want to be the one who says, “I’ll never do this.” I’ve never done nudity, but I couldn’t sit here and say, “I’ll never do nudity.” Right now, there hasn’t been a project that’s come up that I feel it’s necessary for nudity. And I do think that there are some projects where nudity is necessary. But personally I have more of an obligation to my son, to art, when it comes to nudity. And I’ve seen other actresses have to deal with it or I’ve seen their children actually have to deal with someone saying, “I saw your momma’s titties.” It’s hard enough being 11 years-old than to have some extra, added stuff that your mom threw in it. It’s hard enough. I don’t feel that I should have to expose him to that. But like I said, I wouldn’t say that I would never do nudity.

KW: What advice do you have for aspiring actresses?

RK: I am not the type of person that offers advice. I’ve seen that backfire way too many times. And when you offer it when it’s not asked, I think sometimes you come off as you’re putting yourself on a pedestal. So when I am asked, I guess the main advice that I give or most consistently give is to stay true to yourself, because if you don’t stay true to yourself, you look up later and see the most unhappy person in the world.

KW: What has been the secret of your success?

RK: I don’t know if it’s a secret. I think it starts with my mom. It starts with having a really strong mother, grandmother that just secured a really strong foundation for me. First and foremost, I was her daughter. I wasn’t her friend. I know a lot of mothers and daughters have the friend thing, but my mother always demanded the respect that a mother deserves and the regard that a mother deserves. I never wanted to disappoint my mother. I think her just being a great role model and just being an elegant woman was pretty awesome, is pretty awesome.

KW: Are you going for that same type of relationship with your son?

RK: Yes, but I think the dynamic between a son and mother is different than a mother/daughter relationship. I wouldn’t say I definitely keep it friends, but I do talk to my son more openly about things than my mother did with me and my sister.

KW: How are you being affected by the writer’s strike?

RK: It’s affecting me first and foremost with this film because we’re not able to do any nighttime shows. So it kind of cuts the press that we would normally do leading up to the real hard, major press that you’d normally do a week before a movie comes out. We’re not going to be able to do that because of the strike. So that is an immediate effect right there. Having my own production company and having projects in development, they’re all on standby right now because the writers can’t finish. So, yes, it affects us all. It affects everybody.

KW: What would people be surprised to learn about you?

RK: Something that people don’t know about me that would be surprising… Everyone knows I’m an ’80s kid, so I love hip-hop. I probably can recite the lines to every Rakim song. I thought I was a female Rakim at one time. Oh, that I’m a huge sports fanatic, maybe that might be a surprise, that I probably can go toe-to-toe with any guy when it comes to my knowledge of football and basketball.

KW: Thanks for the time, Regina, and good luck with all your endeavors.

RK: Thank you very much, have a great week.