The UFO world in this UFO-inspired film is never created and the entire movie is an endless barrage of UFOs firing at marines, and marines firing back. It’s mindless and noisy but of course the special effects are stunning, so if computer generated images satisfy your cinematic appetite, then this film is for you.

Staff Sergeant Nantz (Aaron Eckhart) is a career Marine who is battle weary and on the brink of retirement when the first sightings of UFOs are reported. He is reluctant to go back into service but as the alien invasion accelerates, his call to duty overwhelms him and he leads his platoon into battle. 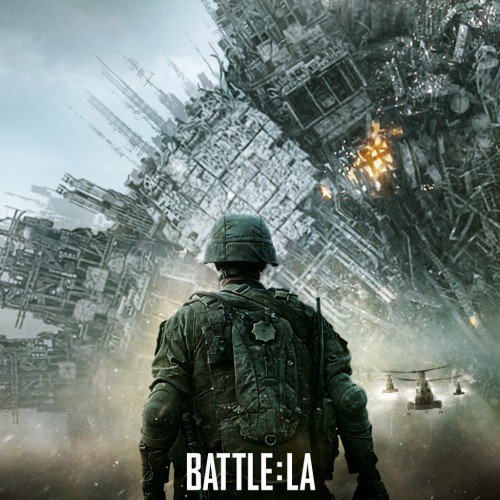 We are introduced to Nantz in a short scene that is laden with obvious exposition and we then flit from marine to marine, as if the filmmakers are in a hurry for the battle to begin, with no heed given as to who will be firing the bullets. This lack of character set-up might not have been such a disaster if the dialogue had been kept light and quirky, but the story tries to deal with serious emotional issues and this comes over as inapt and jarringly insincere.

The world being invaded by aliens is, of course, an incident of endemic proportions but, instead of any kind of build-up, we get to hear about it from a casual TV announcement, thus the impact of the aliens’ arrival is trivialized and tension is at zero. It would have been far more exciting for the audience to witness the first appearance of an alien craft, and then watch as they assemble, one by one, while the world sleeps. Equally underplayed is the unique idea that the invaders have come to earth for our water, and that our oceans are being depleted. Visuals of this would have been mesmerizing but, again, this information is delivered in boring dialogue and, considering so much weight is given to special effects, shows a dire lack of imagination. It’s not just explosions that can light up our screens.

Equally unimaginative is the fact that the aliens’ artillery is no more advanced than the mortals. This extra-terrestrial army fire off rounds of hit or miss ammunition and don’t have so much as a digitized light-saber up their sleeve which is very surprising as, after all, they do live up there with our satellites.