Helmed by Tunisian filmmaker and artist Nacer Khemir (Markers of The Desert, The Dove’s Lost Necklace), Bab’Aziz: The Prince Who Contemplated His Soul is a marvelous and enchanting visual and mystical cinematic excursion through Sufi Muslim legend, and certain to delight viewers no matter what your religious persuasion, or lack of it. Though the narrative has a deliberately calm and leisurely pace that often goes nowhere in particular, the desert dreamscapes are so exquisitely drenched in dazzling euphoric light and contrasting dark introspective moods, that the episodic structure and tone are essentially irresistible, from the opening shot to the lyrically seductive enigmatic finale. 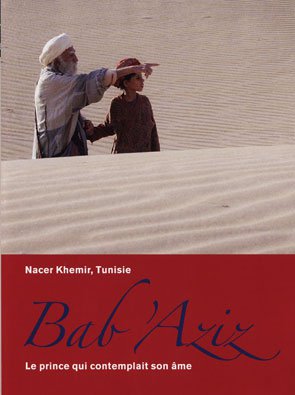 The fragments of a number of stories are connected by a narrative thread touching on the pilgrimage across an immense desert of a philosophical old man Bab’Aziz (Parviz Shahinkhou) and his vivacious young granddaughter Ishtar (Maryam Hamid). The elder Bab’Aziz is on a journey to meet up with the whirling dervishes, whose international ceremony takes place at some unnamed destination they are all apparently drawn to instinctively, and which occurs only once every thirty years. The film tracks the unanticipated adventures of this pair along the way, including both real and surreal occurrences, through which is intertwined Bab’Aziz’s’ episodic tale of a legendary prince who became obsessed with staring at the reflection of his own soul in a pool in the middle of the desert, and so forgot about his people, who in turn forgot him.

Bab’Aziz: The Prince Who Contemplated His Soul is filled with the sumptuous, elegant simplicity of delicate yet majestic imagery that Hollywood, in its brash and raucous hi-tech showoff wizardy, has much to learn from. And the ancient, enduring contemplative fantasy world conjured throughout, exists side by side nearly seamlessly, with the periodic intrusion of contemporary times, as motorcycles and camels enjoy a strange peaceful co-existence in their parallel universes in the desert. There is also a plethora of dervish song and dance to delight the senses – including scenes of women dancing that were reportedly cut for the version distributed in Iran. But that Bab’Aziz essentially steals the open air show, as an elder who can really shake his whirling booty.

Bab’Aziz: The Prince Who Contemplated His Soul opens at the Cinema Village in NYC on February 8th, and across the country in the following weeks.