If what frightens you best in real life makes for the scariest movies of all, then a medical thriller should certainly top that list. In other words, if surgery on any of your particular body parts isn’t enough to freak you out, then the bill for medical services rendered should do the trick.

The transplant terror thriller Awake covers all those bases with associated dread, and is not recommended as a viewing experience if you’re visiting your own doctor any time soon. Awake refers to an unusual phenomenon known as anesthetic awareness, claimed to be experienced by some patients during surgery, where their bodies are immobile but they see and feel everything.

The unfortunate patient in question in Awake is Clayton (Hayden Christensen), a Wall Street whiz kid living in the lap of luxury, though under the affectionate but domineering control of his billionaire socialite widow mom, Lilith (Lena Olin). That Lilith is better known in legend as a mythological storm demon and the bearer of disease and death, is likely no coincidence here. 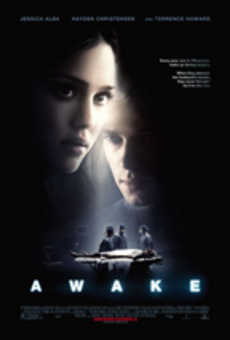 Clayton appears to have a dream life, except for a bum heart that needs a replacement, and soon. At the same time, the ailing young plutocrat is very secretly engaged to Samantha (Jessica Alba), the family servant who is increasingly impatient playing the invisible ‘other woman’ to her boyfriend’s overly doting mother. The bossy matriarch also insists that Clayton allow an eminent surgeon and friend of the family to perform his heart transplant rather than Dr. Harper (Terrence Howard), a surgeon with a detailed malpractice rap sheet who befriends Clayton over at the hospital.

Besides that string of medical litigations, Dr. Harper has a weird bedside manner, urging Clayton during their fishing expedition on the banks of the polluted East River, to get married like right now to make the most of life, because he’s not going to live long, even with the transplant. It’s never clear if the doc is talking about an abbreviated life span due to consuming fish yanked out of those murky Manhattan waters, but in any case, he’s up to serving as best man in an overnight fast track ceremony, as well as his personal surgeon.

Awake is most creepy when taking medical procedures to extremes, as Clayton is treated to viewing his own chest being ripped open while the could-care-less surgical team seems to be telling jokes and partying around the operating table. Later, Clayton’s ghost wanders around the hospital and a nearby subway platform barefoot and in a hospital gown, mulling his own near death experience. Less convincing but still sufficiently yucky is a related yarn about medical treatment for profit brought to a new low, something we’ve all likely experienced.

Awake would make a swell double bill with Michael Moore’s Sicko or Tony Krantz’s recent intensive care malpractice chiller, Sublime, and their shared denunciation of patient abuse. This hospital horror fare also has a lot in common with another flick opening this week about patient paralysis, Julian Schnabel’s The Diving Bell And The Butterfly.

Suffice it to say, without giving too much away, the plot sickens in connection with a hospital coke machine and a coked up Santa. And that’s all I’m going to say upon penalty of being lynched by the movie company. Sex, Lies and Surgical Tape meets I Saw Mommy Killing Santa Claus.