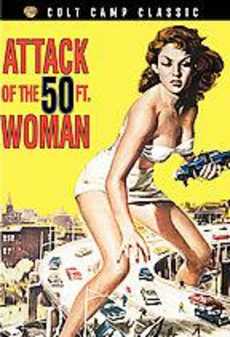 Attack of the 50 Foot Woman is a sci-fi horror thriller which was originally released in 1958, back when such black & white mutant movies were all the rage. This inadvertently hilarious B-flick relies on cheap, transparent trick photography which now shows how far Hollywood has come in terms of special f/x.

Nancy’s recently been released from a mental institution, and scheming Honey is set on somehow replacing the heiress at her palatial estate. Meanwhile, Nancy knows that she’s married to a philandering gigolo who’s only after her $50 million bank account.

But before Honey and Harry have a chance to commit murder, a comet ominously streaks across the sky. Next, Nancy has a frightening close encounter with an enormous alien who emerges from a perfectly round, glowing satellite that lands right in front of her car on an otherwise deserted stretch of the highway. She reports the incident to the police, but they dismiss the report of a UFO out of hand, assuming she’s either still crazy ill or has been drinking or both.

However, it’s not long before Nancy morphs into a giant herself, and the belatedly-alarmed cops find themselves running for their lives while yelling corny lines like, “Holy Toldeo!” and “I can’t shoot a lady!” Soon, the revenge-minded monster starts stalking roaming around the dusty hills outside of L.A. on a reign of terror, moaning “Harry! Harry!” as she hunts for her adulterous spouse.

The cheesiest sci-fi since The Boy with Green Hair (1948), this campy cult proves that Hell hath no fury like a 50 foot woman scorned.