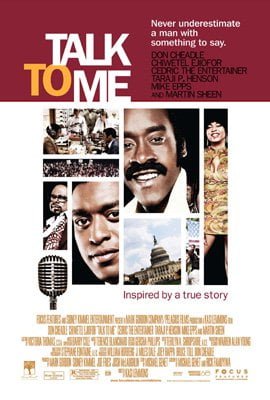 Don Talking to Me about Talk to Me

Donald Frank Cheadle, Jr. hails from Kansas City, Missouri, where he was born on November 29, 1964. His peripatetic parents moved the family around a lot, and Don ended up graduating from East High School in Denver. He then attended the California Institute of the Arts before starting his showbiz career as a dancer in Angela Winbush’s music video for The Real Thing. (see http://www.youtube.com/watch?v=q3AyKLRT4M4) 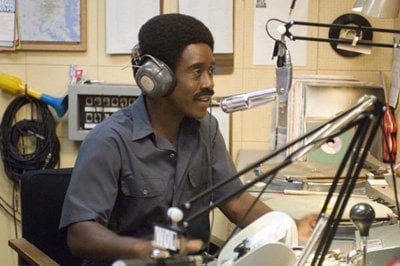 He found his breakout acting role in Colors where he shoots a rival gang member in the movie’s memorable opening scene. Since then, the versatile thespian has enjoyed enviable career which has landed him plenty of accolades and Emmy, Oscar and Image Awrad nominations, and a Golden Globes win for his impersonation of Sammy Davis, Jr in The Rat Pack. 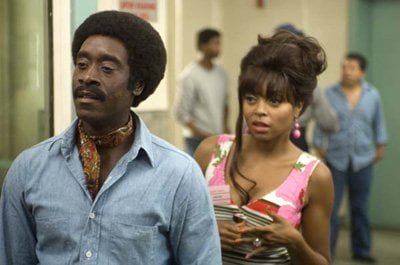 Don has two daughters, Ayana and Imani, with his longtime girlfriend, actress Bridgid Coulter. Here, he talks about his latest picture, Talk to Me, a bio-pic where he serves as executive producer and stars as the late Petey Greene, a convict-turned-radio DJ in DC who rose to fame during the turbulent Sixties.

DC: My goal is to be eminently employable. You can wait around for somebody to hand you something, and I’ve been fortunate that that’s happened for me kind of consistently. But I think that unless you take your career into your own hands and try to get behind the things that you believe in, and support them, and try to make them work, you’re kind of rolling the dice. It’s much riskier. And you’re probably also not going to be as fulfilled. Face it, there’s not a lot of great movies coming out of the American cinema right now. You see it. There’s been a real corporatization that’s happened in Hollywood. Most studios are trying to get their big event, tent-pole summer movie. There’s two movies that they’re going to spend that much time on, and then everything else is getting short shrift. That’s a very narrow funnel that you’re trying to get through. So that’s why it was important for me to go, “This is a movie I believe in and want to support,” and to do whatever I could to push this film through.

KW: How did your taking a role as executive producer add to your commitment to the project?

DC: Well, when you see a film like this, that you are really in love with, you want to jump on and make it work in any way that you can to shepherd it. As a producer, you get to be involved in more aspects of the film. Everything from the way it’s rolled out to the script to casting. You really want to take these things on to kind of protect it and make sure things go the right way.

KW: Did the retro wardrobe, props and Sixties soundtrack make it easier for you as an actor to recreate the ambience of the era in which Talk to Me is set?

DC: Well, you don’t want to rely on those things as a crutch. You still have to make the character real and come from a place of truth inside. But it’s great to have those tools to help you. The clothes… the wigs… the hair… and to look around and to see a world populated with everybody looking like that. The music, obviously, we don’t hear while we’re doing it, but Kasi [director Kasi Lemmons] made CDs of what she wanted to have the music be, so we could think about that music playing while we were doing it. That really was fun, too.

KW: How many folks do you think are aware of Petey Greene and of what he accomplished?

DC: Very few people outside of the DC area. And if they’re not of a certain age, they’ve never heard of Petey, don’t who he is, don’t know what he did, and would be amazed to know that he was the voice of that city, and that when he died, thousands of people came to his funeral. So, he was really able to galvanize that community. I think you learn about Petey here, but this isn’t really a bio-pic that’s trying to educate about this person’s life. I think more than that, this is an entertaining film about this friendship that is at the center of it. It’s a kind of a friendship between two men that you don’t usually see at the center of a film. Especially not two black men. Then you throw in Vernell [played by Taraji P. Henson], and it’s this triumvirate of friends, and about how they came through these real tumultuous times, and stayed together… broke apart… came back… And how they impacted the times, and how those times impacted them.

KW: Tell me a little about how that friendship between Petey and Dewey [played by Chiwetel Ejiofor] is forged.

DC: It starts when Petey Greene runs into Dewey, whose brother was incarcerated at the time. He just sort of had a vision and saw who Petey was. I don’t think it was an immediate thing, but he realized hat this guy really was, quote-unquote, the voice of the people, a street level guy, as Dewey was himself. But Dewey had gone through a lot of manicuring to prepare himself for the position he had gotten to and for that world. But Petey was just a raw talent. Dewey recognized that and brought him onto the radio station, WOL.

KW: How did Dewey feel about Petey being that raw talent, and speaking his mind?

DC: Dewey loved the fact that Petey could get away with saying things and behaving in ways that Dewey really could back, but not overtly. So, he loved having Petey be out there as his mouthpiece and as his man on the frontline of issues that he may have felt strongly about. But his position dictated that he be more politic. Petey could care less about being politic. He could care less about soft-pedaling something. He just went straight for what he thought. And I know Dewey appreciated that about him, because that’s what Dewey really was, at his core.

KW: What makes Pete’s story relevant in the present?

DC: Petey’s story is very relevant today, because I think very few people are willing to stand up and point out what, in my estimation, are very clear inequities and inadequacies. Government is not necessarily behaving in a way that’s for most of the people. And if we had Petey Greene around right now, there would be no dearth of material that he would have. He would have years and years of material to talk about. We just don’t have that kind of a populist figure today that’s standing out the way that Petey Greene did on WOL and on his television show.

KW: And how would you describe Petey’s relationship with Vernell?

DC: As we see with many troubled relationships, she’s there for her man. And come hell or high water, that’s her man, and she’s going to get his back. Now, he’s got to do some things to live up to that relationship, and she puts him through it. But ultimately, she’s got his back

KW: How was it working with Chiwetel andTaraji?

DC: Very boring. That was the part of the casting that didn’t go so well. [Laughs] No, Chiwetel is great. We were very lucky to find both of them and to have both of them in this movie. Everyone came to this as a labor of love. This is a smaller film. You’re not doing this because there’s some big payday or because you think there’s going to be this big splash and huge rollout that a movie like Ocean’s 13 would get. But because we all really believed in the film, we’re really all there for the love of the game. I think it shows in the film, in the characters, and in the actors that we pulled together.

KW: Since this was a labor of love, was there any discussion on the set about Petey’s politics and dedication?

DC: Of course, we talked about stuff. We talked about activism and Petey’s kind of being an example, putting his money where his mouth is, getting arrested and al the things that he went through. You often feel like you’re swimming upstream, but that’s just the nature of it. That’s how it’s going to be, and you just can’t stop. The Sixties definitely left a scar on black people’s psyches, after our leaders were hunted down, killed, arrested, and marginalized. That was a very specific, programmed, and well thought out attempt to keep us separate. I don’t know that we’ve ever been able to come back to the table around that. That doesn’t change unless you fight hard to make it change, and keep on keepin’ on, for lack of a better term.