How many times have you heard yourself say that the book was better? Well, be prepared to add this historical drama to that long list of disappointing screen adaptations. Based on Ian McEwan’s critically-acclaimed romance novel of the same name, Atonement is an overly-ambitious adaptation which takes license with conventional, linear storytelling by periodically repeating scenes from slightly different perspectives.

This implausible flight of fancy was directed by Joe Wright (Pride & Prejudice) who earns higher marks here for crafting a vibrant and visually-stimulating spectacle than for his picture’s ultimately unsatisfying underlying plotline. Stripped of its cinematic pretensions and period costumes, the film is essentially a very eventful tale of unrequited love. It all revolves around an improbable, incestuous love triangle which tears two sisters apart, ruins a promising young man’s future, and leaves the vengeful, odd-girl out wracked with guilt for the rest of her days.

Set on the sprawling country estate of the Tallis family, this generation-spanning saga opens in England in 1935. There, we find our protagonist, 13 year-old Briony (Saoirse Ronan) staging her own plays with the help of her relatives. She also devotes considerable time to spying on her big sister Cecilia’s (Keira Knightley) flirtations with their housekeeper’s handsome son, Robbie (James McAvoy).

Cecilia and Robbie, both students at Cambridge, have recently returned home for summer vacation. Although too young to turn his head, the sexually-awakening Briony has a crush on Robbie, too. But because he only has eyes for her sibling, the frustrated voyeur begins to misread the macho object of her affection as a carnal, out of control pervert.

This tendency turns tragic the night she comes upon her Cousin Lola (Juno Temple) being raped by a stranger on the grounds outside the mansion. Based on Briony’s eyewitness testimony, however, Robbie is unfairly convicted of the crime and is carted off to prison.

Fast forward a few years. World War II has broken out. Ex-con Robbie has enlisted in the British Army and is participating in the evacuation of Dunkirk. Cecilia and Briony are both nurses back in London, though they no longer speak to each other. The former still pines for Robbie while the latter is now saddled with overwhelming regret about having fingered an innocent man. 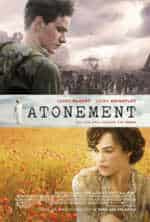 But in lieu of righting the wrong, Briony, an aspiring writer, takes to chronicling the course of Cecilia and Robbie’s undying love relationship in a novel called Atonement, a task which takes sixty years to complete. On her death bed, Briony (as portrayed by Vanessa Redgrave) pulls a rabbit out of her hat which conveniently fills in all the pieces of the puzzle. However, that unfair turn of events renders almost meaningless most of what you’ve just emotionally invested a couple of hours.

What’s it all about, Briony?