An ATM machine that comes up empty and proclaims you’re out of cash, may not be the worst thing in the world. At least if director David Brooks apparently has any say, with his nerve-shredding electronic chiller, ATM.

And with the combo of the brand new century and the digital age kicking in, haunted houses as the horror venue of choice may now be pretty much as old school and replaceable as can be. ATM? Who would have thought such a bland, functional pit stop always routinely along the way to somewhere else, could hold impressively multifaceted implements for inducing such sheer psychological terror in its random captives.

But Brooks excels at mining the ATM’s elaborate mechanical devices and security systems for blowing minds, while teasingly exploiting all their potential flaws. Along with the roach motel concept that locks can be a two way street, checking you in as well as the unthinkable other way around.

ATM tracks the misfortunes of three young hotshot stockbrokers in a frosty burb one late winter night, following an office Christmas party. Shy wimp David (Brian Geraghty) can’t muster up enough courage to hit on the company hottie, Emily (Alice Eve). But manages to con her into a car ride home with him, after pursuing her outdoors with a scarf he steals from another woman, and pretending he thought it was her own.

But this premeditated date scenario tanks after super-con coworker Corey (Josh Peck) insists that he get a ride home too. Though not before Corey demands they stop at the ill-fated ATM kiosk in question for a necessary money withdrawal, in order to buy a pizza. Oh wait, it’s David’s money that Corey has in mind to withdraw, claiming his bank card isn’t working. Hey after all, these are financier hustlers.

Somehow they all end up in the ATM booth because it’s way below freezing out in the deserted parking lot, just as a creepy stalker in a hooded parka turns up outside, glaring at them. And when a stranger happens by walking his dog, the apparent maniac beats him to death for no particular reason. And from that point on, he takes his time sadistically toying with the terrified trio, like trapped animals inside a fishbowl cage.

ATM accomplishes what all effective horror must do, and that is drum up enough visceral panic in the audience to put you in that booth with the victims. And, at the freakish mercy of a madman with no discernible motive in mind. Though one moment of macabre humor does surface when David – who was recently responsible for a client losing half of his 401(k) savings – wonders out loud if the lunatic might just be an irate investment customer. 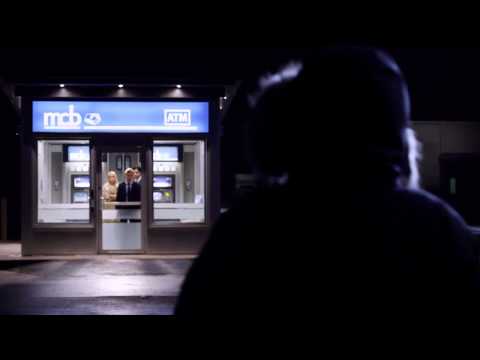