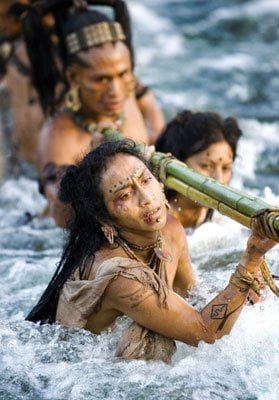 A pretentious saga of Shakespearean proportions, Apocalypto is set in pre-Columbian Mexico during the declining days of the Mayan Civilization. Though purporting to explore a litany of themes from revenge to rebirth to redemption, this messy, mythical tale is essentially a high-octane action flick masquerading as a cerebral costume drama.

Unfortunately, the movie amounts to little more than an aggravating test of patience, since you have to read the translation of its obscure Mayan dialogue. At the point of departure, we’re introduced to the picture’s protagonist, Jaguar Paw (Rudy Youngblood), a noble brave living in a community of peace-loving natives in a jungle on the Yucatan Peninsula.

Before long, their innocence is abruptly interrupted by the arrival of an army of plundering marauders. And just before he’s dragged off in a forced march to a Mayan metropolis, the quick-thinking Jaguar Paw hides his son and pregnant wife (Dalia Hernandez) in a pit, vowing to return to rescue them.

Upon the captives’ arrival in the ancient city, Jaguar and his comrades are body-painted in preparation for decapitation on a sky-high altar before the court of the king. Of course, our dashing hero somehow miraculously escapes, and the chase is on. Thus, begins his Ulysses-quality return trip home, a harrowing ordeal where he must survive by his wits if he is ever to be reunited with his family.

Unfolding more like an unapologetically violent video game than a history lesson, the bloodletting in Apocalypto pauses only briefly, sprinkling the screen with silly, off-color asides, and distracting allusions to screen classics. About the best that can be said for this overblown fiasco from Mel Gibson is that at least it isn’t anti-Semitic.

In Mayan with subtitles