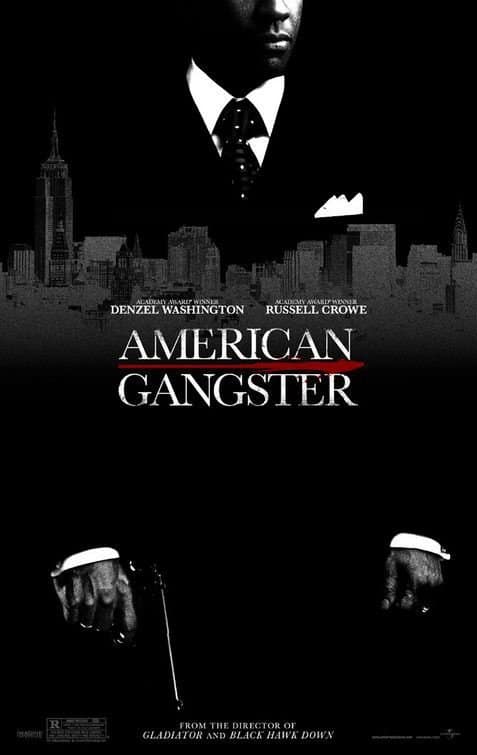 Not entirely unrelated that the gut spilling, gore-y crime thriller American Gangster opens in theaters just on the other side of Halloween, director Ridley Scott as sly screen prankster may in fact be more into a trick or two up his sleeve subverting mob movie stereotypes this time around, rather than the usual slash ‘n trash gangland mayhem. In a bit of non-traditional, equal opportunity casting as well – with the intriguing added advantage that it all just happens to be true- American Gangster’s real life black drug lord kingpin Frank Lucas (a grinning, scary Denzel Washington) and Russell Crowe’s womanizing, eager beaver Jewish NYPD crime buster Richie Roberts have an oddly tame, ethnically diverse cat and mouse go at it.

His devoted, up and coming apprentice Lucas moves in and takes over the biz, with a shrewd entrepreneurial sense that, parallel to the legit commerce of the time, goes multinational peddling heroin in a big way. The global drug trade flourishes under the outwardly congenial, dangerous loose cannon Lucas. Even Kuomintang exiled military honcho Chiang Kai-shek takes time out from doing battle against Mao’s China, to finance his own operations by swiping drugs for cash with Lucas deep in the jungles of Southeast Asia. The Harlem big shot’s crafty, ghoulish scheme is to seal the seemingly foolproof deal by smuggling the dope back to the states from Nam, in the body bags of deceased soldiers. And the big bucks are flowing into the NYPD coffers as well, corrupting the low wage-working cops there.

Standing steadfast against a police force rife with temptation hard to resist, is Detective Roberts. An aspiring lawyer studying for the bar, Roberts is keen to do major all-purpose damage to the local drug lords in court, and not just collar them in the hood. As the scent of major supplier Lucas gets stronger all the time with Roberts on his elusive tail, American Gangster builds to a showdown that is more psychological duel than the usual flesh-bruising, physically explosive encounter.

American Gangster, clocking in at a whopping two and a half hours, takes far too long to make its point, and nearly overstays its welcome with distracting detours ironically contrasting crime baron Lucas’ upstanding family values at home, with ethical workaholic cop Roberts’ really bad behavior marriage, uncontrollable sex addictions and messy divorce. But to watch these too intense stars sink their teeth into these complex characters is mostly thrilling to behold, and worth whatever the extended wait.