The cross-cultural libation lust documentary All In This Tea, trails along after David Lee Hoffman, a California entrepreneur more than a little obsessed with the savory ancient brew, who has made countless jaunts over to China to haggle over their apparently unique leafy green merchandise like it’s a heated drug deal going down. Cultural ambassador or boutique beverage robber baron? An applied taste test in these matters may have less to do with one’s discriminating palate than the heated politics and economics of rival tea consumption.

Directed by Les Blank and Gina Leibrecht, the film follows Hoffman around China, as he attempts to cut out middlemen and government mandates alike in pursuing pure product from rural local tea farmers, who process the leaves in their kitchen sinks. 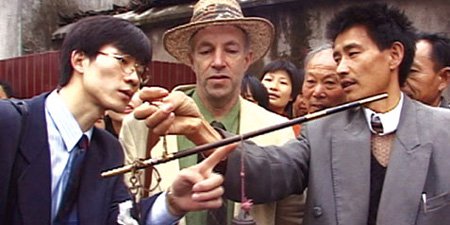 The sixtysomething eccentric college dropout turned global merchant also opines about the tightass customs of the Chinese as he haggles with them to export the crop his way. But their cautiousness is not surprising, when we learn that the priceless tea that once only existed in China, was stolen in the 19th century by European invading industrial espionage agents who smuggled the seeds to India, which later became the largest world tea producer by far. And his patronizing bordering on pompous Eurocentric attitude towards his hosts, talking down to them as if they’re the foreigners on his turf, reaches a low point when they fail to comprehend his use of the term sh** – in English no less – while he impatiently insists on a return to national organic tea farming.

All In This Tea will likely school you in much more than you ever wanted to know about its history and variety. Though the strong and tempting brew upstages Hoffman’s weak arguments for liberating the tea of China and abandoning its factory processing methods. This mass versus class appeal for the sake of a discerning guzzling elite, smacks suspiciously of tea imperialism.

But the most lingering cinematic aftertaste likely resides in the repeated spotting of Hoffman dipping his nostrils deep into bagfuls of the leaves being prepared for shipment back to the States. Making it pretty impossible to shake off the implications of that unpleasant image, when imbibing cupfuls of that steamy liquid at home.