This film is based on the true story of the wealthy Robert Durst, whose wife mysteriously disappeared in New York City in the 1980s and whose body has never been found.

This is indeed rich fodder and should have made a great film but, unfortunately, the only useful purpose it serves is to have spooked the Durst Dynasty. They are, apparently, kicking up in court about the rattling of these particular old bones, but if you’re going to go around bumping off your settlement-seeking wives, what do you expect?

David Marks (Ryan Gosling) is the heir to a real estate fortune who marries Katie (Kirsten Dunst), a working class student. The besotted couple go Bohemian and set up a health food store in Vermont, called All Good Things. 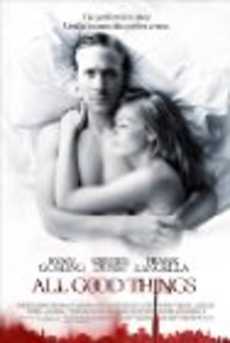 After a while, however, David accepts his father’s offer to go back to work for him and the two return to New York. As their relationship deteriorates, Katie spends time away in their country home which makes David more and more unstable until Katie begins to worry for the safety of her life.

There have been some great movies where the male partner becomes more and more controlling, and the female falls more and more under his spell, but in this script the only weird thing about David is that he talks to himself (Yes, I know we all do it, but that doesn’t mean it’s not weird). From having these little chats, David suddenly takes an almighty leap to become completely psycho and, with such an absence of a build-up, we merely think that he’s having a werewolf moment.

All the characters in this film are thinly drawn. The father is a bullying stereotype, who drops in and out like a bad neighbor. David is a trust fund baby. When he decides to go back to work for his father, it’s simply not justified. Katie is sweet enough but when she stays with David just for his money it’s impossible not to dislike her. We are soon left with no one to like or even to relate to and when tragedy strikes it’s more a ‘so what?’ than an ‘oh dear’.

Then we come to the “falling in love” scenes of the doomed couple. One of these includes Katie singing and dancing for her beau, which is the exact same scene used in Blue Valentine, in which Gosling also recently starred. Obviously he was aware of this and must have said something to the producers like “Do you think someone will notice?.” Well, at least now they’ve got the answer to that one.