On Wednesday, January 23, 2002, Wall Street Journal reporter Daniel Pearl (Dan Futterman) vanished soon after bidding farewell to his pregnant wife, Mariane (Angelina Jolie), and entering a taxi waiting outside the home of his colleague, Asra Nomani (Archie Panjabi). At the time, he was on assignment in Pakistan, following a promising tip which he expected to lead to a face-to-face interview with Sheik Mubarak Ali Gilani (Ikram Bhatti), a religious figure rumored to be behind assorted al-Qaeda operations, including shoe bomber Richard Reid’s aborted plot to bring down an airliner over the Atlantic. 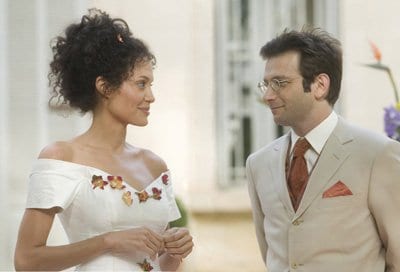 But Pearl, a Jewish-American born in Princeton, New Jersey, had apparently been betrayed by his source, or by the cabbie, or both. And instead of breaking an exclusive story, he ended up in the hands of a mysterious man named Bashir (Aly Khan) a member of a secret cell of radical Muslims cell taking orders from 9/11 mastermind Khalid Sheik Mohammed.

When the intrepid investigative journalist failed to return that evening, his understandably anguished spouse alerted the authorities. A massive manhunt ensued, a cooperative effort launched by the Pakistani police, the FBI, and agents of the U.S. State Department’s Diplomatic Security Service. This international team, armed only with a handful of often misleading clues, embarked on a futile attempt to crack the case.

Meanwhile, for the next nine days, Danny was held incommunicado by kidnappers who issued a set of non-negotiable demands, including one for the release of all suspected Pakistani terrorists taken to the detainment camp at Guantanamo Bay. The rescue mission was called off when a videotape of Pearl’s beheading was leaked over the Internet. 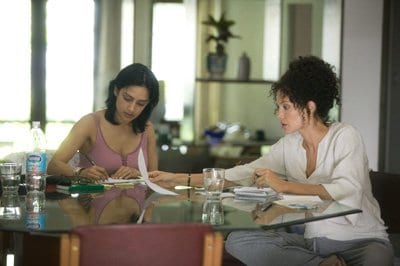 This whole horrifying ordeal was recounted by Mariane in a best-selling memoir entitled “A Mighty Heart,” and that heartbreaking account served as the source of this surprisingly-riveting docudrama directed by Michael Winterbottom. Thus, the movie is presented primarily from Pearl’s widow’s point-of-view, which means the picture’s fortunes rise or fall with the performance of Angelina Jolie.

Jolie, dominating nearly every scene, is rather remarkable in this star vehicle, effectively conveying a convincing combination of unwavering dedication and the dire desperation of a woman who insists on remaining at the center of the search for her the love of her life. As a consequence, those complaining about Angelina, who is French, Czech, German and Native-American, playing a woman of Dutch, Jewish, African, Cuban and Chinese extraction are unlikely to find much in the way of support for their call for an organized boycott. Maybe there wasn’t a Dutch/Jewish/African/Cuban/Chinese actress available. 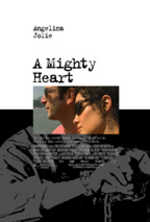 Regardless, for some reason, a bittersweet female empowerment flick as moving as this, with a message as ultimately optimistic as this, generally tends to trump its detractors, and I suspect A Mighty Heart will be no exception to the rule.

In English, Urdu, French, Arabic and Siddhi with subtitles.