Going against the grain of all those stereotypical sex object or saintly roles that actresses usually get stuck with in movies, Katherine Heigl is definitely into trying out what’s new and different, and we’re not just talking dresses. And whether or not those characters signify any improvement, Heigl doesn’t mind at all doing unattractive, so the heck with vanity. Moving on from her cranky nag in Knocked Up (one of two first-date Fertile Myrtles on the screen last year, along with Ellen Page in Juno), Heigl conversely gets immersed in the role of your typical self-effacing female doormat for Anne Fletcher’s 27 Dresses.

Heigl is oddly, far-from-it plain Jane, a lonelyhearts Manhattan office drudge who’s got a heavy duty longtime secret crush on her handsome boss George (Edward Burns). She goes so far to prove it with devoted rituals like fetching his favorite burrito every morning, but the only emotion she sparks in the clueless honcho is appreciation. Jane deals with her frustrated romantic longings by living vicariously through other women’s lives. Specifically, by sorting out all the wedding details of twenty-seven girlfriends so far, and signing up for bridesmaid duty at each ceremony. And she’s got a closetful of over two dozen of among the most outlandish of those bridesmaid gowns to prove it. Fashion police be forewarned. 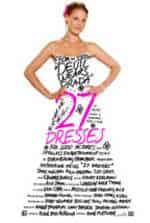 Jane is so entirely self-effacing and focused on the needs of others in the extreme, that she’ll even lift up the gown of an intended bride so she can pee properly into the toilet before taking those vows, you can’t find a better pal than that. But Jane’s mostly dreary, quick-fixed fantasy wedding revelry rounds are rudely shaken up when her globe-trotting man magnet sister Tess (Malin Akerman) arrives in town, and makes moves on George.

Quicker than you can say 27 Dresses, Tess has got the boss prepped for walking down the aisle with her, though the covert swinger has got to do a quickie personality makeover to convince him that she’s marriage material. And Jane, who’s been doing the supremely servile underling routine for so long, finds herself suddenly pushed out of the picture like a starter wife who’s just been tossed aside for a more seductive model.

There’s also an annoying newspaper wedding column writer Kevin (James Marsden) who starts snooping around, after getting wind of Jane’s unhealthy wedding obsessions, and he’s sensing a big breakout story there for his career. But much like her character in Knocked Up, Heigl just can’t seem to keep her distance from guy trouble or her libido in check, every time she hits the booze at a convenient bar in the vicinity. Akerman too drags a bit of her persona from her last movie into yet another messy triangle touching on wedding blues, with her repugnant hottie in The Heartbreak Kid.

27 Dresses lacks the kind of bracing satire we’d expect from the screenwriter, The Devil Wears Prada’s Aline Brosh McKenna. Here, the devil wears taffeta and the script is more frothy than cutting edge. A couple of well-aimed jabs at the ostentatious consumerism of the wedding industry might have made a big difference. On the plus side, are the bizarre array of those 27 dresses in question that, who knows, could add some festive spark as recycled ornate rags for a future Mardi Gras or other down the line.