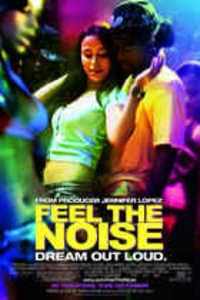 Feel the Noise (PG-13 for sensuality, violence, sexual innuendos and drug use). Omarion stars in this overcoming-the-odds drama about an aspiring rapper who, after a run-in with gangstas, flees Harlem for Puerto Rico where he bonds with his father (Giancarlo Esposito) while still pursuing his dream of stardom via Reggaeton, a local genre of music enjoyed by his step-brother (Victor Rasuk) and an irresistible dancer (Zulay Henao).

The Good Night (R for profanity and sexuality) Romantic comedy about a once-promising pop star-turned-jingle writer (Martin Freeman) who’s deals with his depression about his fading career and deteriorating relationship by fantasizing about the perfect mate (Penelope Cruz) while in the dream state. Cast includes Gwyneth Paltrow, Simon Pegg and Danny and Lucy DeVito.

The Heartbreak Kid (R for profanity, crude humor and graphic sexuality) The Farrelly Brothers direct this romantic comedy about a confirmed bachelor (Ben Stiller) who finally ties the knot only to fall in love with a woman (Michelle Monaghan) he meets while on honeymooning in Mexico with his suddenly insufferable bride (Malin Akerman).

Michael Clayton (R for profanity) George Clooney handles the title role in this conspiratorial corporate potboiler about a discontented attorney assigned to handle some dirty work by a senior partner (Sydney Pollack) at a leading NYC law firm. With Tilda Swinton, Ken Howard and Michael O’Keefe.

The Seeker: The Dark Is Rising (PG for fantasy action and scary images) Sci-fi adventure about a young boy (Alexander Ludwig) who discovers that he is among the last of a group of immortal warriors capable of time-traveling for a cataclysmic showdown with evil forces capable of unleashing unimaginable powers of biblical proportions.

Broken (Unrated) Heather Graham stars in this psychological thriller about an aspiring singer from Ohio already facing up to her diminishing dreams while working as a waitress in an L.A. diner, when things go from bad to worse with the return to town of a disturbed ex-boyfriend (Jeremy Sisto) who’ll stop at nothing to get her back.

Desert Bayou (Unrated) Post-Katrina documentary, featuring Rabbi Shmuley Boteach and New Orleans native Master P, recounts the ordeal of 600 evacuees airlifted to an abandoned military base in Utah where they had to contend with bureaucratic indifference, ethnic intolerance and the imposition of arbitrary rules in a previously lily-white Mormon enclave.

Finishing the Game (Unrated) Comedy about the efforts of a Hollywood studio to find a stand-in for martial arts star Bruce Lee, who died in 1973 during the filming of Game of Death after shooting just a dozen minutes of action scene.

For the Bible Tells Me So (Unrated) Gay-themed documentary delineates how the Religious Right relies on a twisted interpretation of the Bible to stigmatize the homosexual community. Cast includes Bishop Desmond Tutu and former U.S. Congressman Dick Gephardt.

The Girl Next Door (R for nudity, profanity, graphic violence and sexual abuse involving minors) Horror flick, set in 1958, based on the Jack Ketchum novel of the same name about the torture of a couple of young orphans (Blythe Auffarth and Madeline Taylor) by the sadistic aunt (Blanche Baker) who adopts them after their parents die in a car accident.

Kurt Cobain: About a Son (Unrated) Bio-pic about the late front man for the grunge band Nirvana culled from 25 hours of audiotaped interviews conducted by music journalist Michael Azerrad about a year before the drug-addicted rocker blew his own brains out with a shotgun.

Strange Culture (Unrated) Big Brother documentary revisits the curious case of artist/professor Steve Kurtz who was detained by the FBI as a suspected bioterrorist while dozens of agents in Hazmat suits quarantined his home and confiscated his computer and manuscripts within hours after his wife died in her sleep of heart failure.

Weirdsville (R for violence, sexual references and drug use) Horror comedy about a couple of slackers (Scott Speedman and Wes Bentley) who, mistakenly believing a friend (Taryn Manning) has overdosed, end up burying her alive in the basement of a movie theater where a satanic cult performs ritual sacrifices.