Pineapple Express (R for violence, drug use, sexual references and pervasive profanity) Over-the-top teensploit about a lazy stoner (Seth Rogen) who purchases a new strain of weed from his drug dealer (James Franco) only to find himself on the run from sadistic mobsters after he witnesses a murder by a crooked cop (Rosie Perez). Ensemble cast includes Dr. Ken Jeong, Nora Dunn, Bill Hader and Amber Heard. 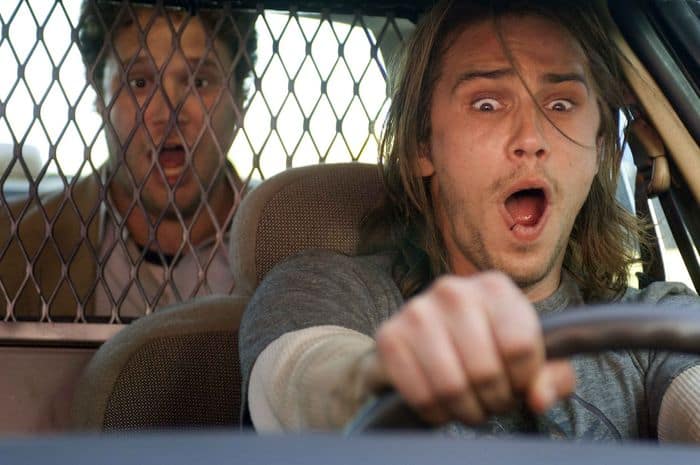 The Sisterhood of the Traveling Pants 2 (PG-13 for sensuality and mature material) America Ferrera, Amber Tamblyn, Alexis Bledel and Blake Lively return for sequel set during the summer following their freshman year of college, which finds the tight-knit friends living in four different cities yet still committed to being there for each other emotionally, despite the distance. Supporting cast includes Blythe Danner, Michael Rady and Jesse Williams.

Beautiful Losers (Unrated) Art imitates hard knock life in this documentary about a generation of anti-establishment young rebels who hung out at a NYC storefront gallery in lower Manhattan in the early Nineties, experimenting with skateboards, hip-hop, graffiti and street fashion, unaware that their innovations would ultimately profoundly influence mainstream popular culture.

Bottle Shock (PG-13 for sexuality, profanity and drug use) Fact-based docudrama recounts the real-life exploits of a couple of California vineyard owners (Bill Pullman and Chris Pine) from Napa Valley whose Chardonnay shocked the world’s connoisseurs in 1976 by beating the best that France had to offer in an international wine-tasting competition. With Alan Rickman, Freddy Rodriguez and Eliza Dushku.

Elegy (R for nudity, sexuality and profanity) Romance drama starring Ben Kingsley and Penelope Cruz, based on The Dying Animal, the Philip Roth novella about a freewheeling college professor who initiates a no-strings affair with a cute Cuban student only to find himself uncharacteristically turning into a possessive, jealous stalker. With Patricia Clarkson, Dennis Hopper and Deborah “Blondie” Harry.

Passing Poston (Unrated) The fallout of discrimination is examined in this documentary revolving around the reflections of four Japanese-Americans left traumatized for life after being shipped to an internment camp for the duration of World War II.

Patti Smith: Dream of Life (Unrated) Intimate bio-pic narrated by Patti Smith herself chronicles the career of the Seventies cult punk rocker, while exploring her paradoxical personality and other sides of the eclectic singer/musician/poet/artist. Featuring testimonials by Sam Shepard, Flea and Philip Glass.

Red (R for violence and profanity) revenge thriller about a recluse (Brian Cox) who turns vigilante and takes the law into his own hands after three twisted teenagers shoot his dog for no reason. Cast includes Amanda Plummer, Tom Sizemore and Robert Englund.

What We Do Is Secret (Unrated) “It’s better to burn out than to fade away” Rockudrama revisits the rise and fall of The Germs, a short-lived L.A. punk band whose lead singer, Darby Crash (Shane West), deliberately OD’d on heroin at the age of 22 in search of his 15 minutes of fame. My my – Hey hey – With Bijou Phillips, Rick Gonzalez and and Azura Skye.