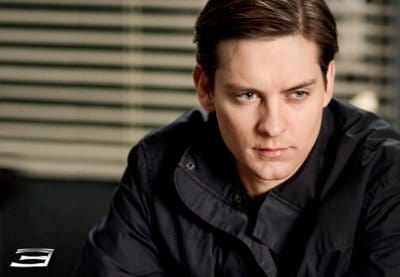 Tobey Maguire was born in Santa Monica, California on June 27, 1975 to very young parents who separated soon after their son was born. Encouraged by his mother to pursue acting, Tobey quit school in the ninth grade and appeared in commercials while still in his early teens.

After impressive outings in films like The Ice Storm, Pleasantville, The Wonder Boys and The Cider House Rules, Maguire landed a breakout role as Spider-Man in 2002. That same year, he proposed to Harvard-trained actress Rashida Jones, daughter of legendary music producer Quincy Jones, but the pair parted ways prior to tying the knot. He is currently engaged to Jennifer Meyer, the daughter of another media mogul, Universal Studios exec Ron Meyer.

Besides Spider-Man, the teetotaling vegetarian is probably best known for Seabiscuit where he played a down-on-his-luck jockey who rode an undersized, underdog racehorse to fame and fortune. His upcoming flicks include Quiet Type, a romantic comedy about a mute man who dreams of conducting an orchestra, and Tokyo Suckerpunch, a mystery about a writer who becomes a suspect in the murder of a movie director.

Here, Tobey Talks about, what else, Spidey 3. 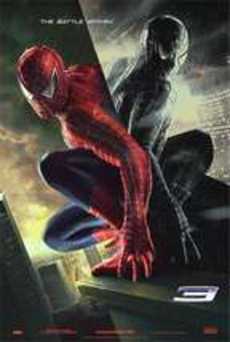 KW: What makes this installment special?

TM: This is the most distinctly different movie of the three, yet it’s still the same characters. But we’ve really raised the bar on this movie. The action sequences are much more thrilling and exciting. I feel like we’ve learned through technology and also just from the experience of doing the previous two, and from really understanding the character.

KW: How was it working with [director] Sam Raimi again?

TM: I’m so impressed with what Sam does, because the whole thing comes out of story and character for Sam. That’s his base, that’s the roots, that’s where it all stems from, but that doesn’t diminish the importance of delivering the cheers and the excitement and the thrills for the audience. He knows that this kind of movie has to deliver on that level. But it’s all got to come out of the storytelling and the characters.

KW: So, where do we find Peter Parker when Spider-Man 3 opens?

TM: Everything is going very well for him. He’s getting recognition as somebody who’s helping his community as Spider-Man. And he’s in this great relationship with Mary Jane [Kirsten Dunst’s character], and Mary Jane’s experiencing success. So, I think things are going pretty well for him. He’s pretty excited, and he’s kind of coming into his own in a way that he’s starting to feel the kind of confidence of becoming a man mixed with the glory in kind of the attention that he’s receiving.

KW: In this installment, how did you approach the introduction of the black outfit and your character’s wrestling with his inner demons when confronted with the option of wearing it?

TM: For me, in talking with Sam, we wanted to make sure Peter was not helpless in this situation, that Peter’s making the choices to wear the suit and allow it to influence his actions. So, he’s not helpless, he’s not a victim. He’s choosing these things, even if his actions or his behavior get away from him a little bit, he’s still responsible for his actions.

KW: How do you like your nemesis this go-round?

TM: I’ve been waiting for Sandman to be a villain in one of these movies. I’m so excited to be going up against Sandman.

TM: I think Sandman’s qualities are very difficult to deal with in that he can shape-shift, basically, using sand in any form. So, it’s really hard to defeat that character. And that’s the great thing about Spider-Man from the comic books, too, that Spider-Man was generally the weaker of the two fighters, and he would have to find the villains vulnerabilities in order to defeat them.

KW: How would you describe your character’s relationship with Mary Jane?

TM: At the core, there’s a real deep love there. So, that’s the base of it and what’s important. But there’s also conflict, and I think it’s really kind of common stuff where Peter thinks he’s got the answers and he’s trying to give MJ solutions. And she’s like, “Please, just listen to me! I really want to be supported and listened to.” But he’s got solutions. Not to generalize, but he’s the type of guy who goes, “Okay, what’s your problem? How can I fix it?” when she’s just got feelings and wants to talk about them.

KW: What type of early feedback have you gotten about the movie?